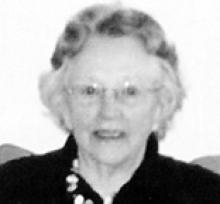 GERALDINE LILLIAN BROWN (nee GRIERSON) April 18, 1919 - February 16, 2018 Geraldine (Gerry) passed away peacefully in her sleep at the age of 98 years. Born and raised in Winnipeg, Gerry departed to BC in her twenties to be a teacher of home economics. While in BC she met and married Gilbert Gordon (Gib) Brown, himself originally from Gilbert Plains, MB. In 1967, Gib and Gerry moved to Quebec where they remained until Gib's retirement, at which time they returned to Winnipeg. Gib passed away in 2014 at the age of 92. Gerry was also predeceased by her two siblings, Roy Grierson and Isobel Grierson. A strong advocate for social issues, Gerry served as a national vice-president for the Consumers Association of Canada in both BC and Quebec, and supported the international Ban the Bomb Campaign for Nuclear Disarmament in the 1960s. After retirement, she and Gib were volunteer mainstays of the Winnipeg branch of both Dr. Lotta Hitschmanova's USC for overseas relief and the United Nations Association for many years. Gerry is survived by her two sons, Edward Joseph (Ted) and Phillip Gilbert (Phil), her daughter-in-law Leslie, her grandchildren, Ian, Derek and Kelsey and numerous nieces and nephews. Mom surprised herself by living to the age of 98. She was not at all sure that she approved of having reached such a great age, but her family is grateful that she did, and to have had her presence for so long. According to Mom's wishes, there will be no funeral service. A private family burial will occur at a later date.