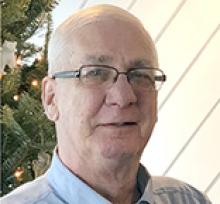 DALE SANFORD GAMEY Sadly, on Thursday, February 22, 2018, Dale Sanford Gamey passed away at the age of 65, at the Riverview Health Centre, in Winnipeg, Manitoba, after a brave battle with cancer. Dale had lived in Winnipeg for many years. Dale was born and raised in Roblin, Manitoba. He grew up in a close family and with a great group of friends who he kept in touch with when he moved to Winnipeg in 1970. Dale graduated from Computer Programming at Red River College in 1973, and his first job was with Health Sciences Centre. He then went on to work for the Manitoba Public Insurance Corporation and finally Manitoba Hydro. One of Dale's great joys was to take his daughter and son, and all their friends to practice and play basketball when they were young. This led him to become one of the founding members of the Winnipeg Minor Basketball Association. Dale leaves behind, his ex-wife Karen, two children, daughter Brooke, son Jay, daughter-in-law Erin and two grandchildren, Brixton and Jonas. They live in Winnipeg and Gonor, Manitoba. Dale is also survived by his mother Mary Gamey, his sister Lark Gamey, and brothers, Blair Gamey and Tye Gamey. His father Wilford Clarke Gamey, passed away at the age of 95, in Robin, Manitoba, in 2012. Both the viewing and service will be held at Cropo Funeral Chapel, 1442 Main Street, Winnipeg, Manitoba on Tuesday, February 27. Viewing will be from 3:15 p.m. to 4:00 p.m., service at 4:00 p.m. with dinner to follow. Everyone is welcome. In lieu of flowers, kindly make a donation to CancerCare Manitoba at www.cancercare.mb.ca.