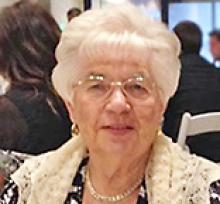 ELISABETH GESKE It is with sadness, but relief for the end of her suffering, that we announce the passing of our beloved mother, grandmother and great-grandmother on February 23, 2018. She was predeceased by her husband Harald in 2009, and is survived by her two daughters, Erika (Dennis Browaty) and Marlene (Ross Bradshaw), grandchildren, Jeff (Tara), Tim (Nicole), Andrea and Eric, and great-grandson Brooks. Elisabeth was born on January 11, 1924 in Nikopol, Russia and met Harald in Germany after the war and was married in June, 1947. She came to Canada in 1951 with her husband and daughter. They settled in the West End before moving to East Kildonan. In their retirement they moved to Fort Garry Place and Elisabeth moved to Concordia Villages after Harald passed away. Many summers were spent at Camp Neustadt and many winters were spent in Cuba, Dominican Republic and Mexico. After spending some of her initial years as a seamstress, Elisabeth worked as a retail clerk in Eaton's for several years. She was a long serving member of the Ladies Auxiliary of the German Society of Winnipeg and a volunteer at the German Pavilion of Folklorama. She faithfully served with the Rosenthaler Kraenzchen of the First Mennonite Church. Flowers are gratefully declined and donations may be made to Bethania Mennonite Personal Care Home or the Mennonite Central Committee. A funeral service will be held at Klassen Funeral Home, 1897 Henderson Highway, Winnipeg, MB at 10:00 a.m. on Wednesday, February 28, 2018. KLASSEN FUNERAL HOME 1897 Henderson Highway, Winnipeg, MB (204) 338 0331 Condolences may be sent to www.klassenfuneralhome.com