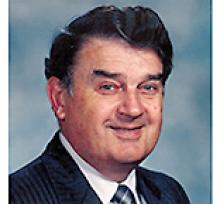 STEVEN LAWRENCE BANERA April 17, 1933 - February 25, 2018 It is with utmost sadness that we announce the passing of our husband, father, grandfather and great-grandfather, Steven Lawrence Banera, who passed away suddenly at the Selkirk Regional Health Centre, on Sunday, February 25, 2018 at the age of 84 years. Leaving to cherish his memory is his wife of 59 years, Joyce, daughter Sheryl (Larry) Sinclair, son Trent (Annette), grandchildren and great-grandchildren, Taylor, Brady and Judd Sinclair; Michael (Cathy) Krawchuk, Olivia; Marnie Krawchuk (Manu), Jack and Lainie; brother Harold (Bernice), and many nieces, nephews and cousins; extended family mother-in-law Anne Yanisiw, sister-in-law Grace (Ron) Mihaychuk and Carla. He was predeceased by parents Bill (1985) and Sadie (1998), brother John (1958), and father-in-law John Yanisiw (1985). Steven was born in Teulon, MB on April 17, 1933 and grew up and attended school in Chatfield, MB, Teulon, MB, Normal School (1954 to 1955) and Universities of Winnipeg and Manitoba. He was very community oriented and served on Selkirk Town Council for six years, member of the Selkirk Kiwanis Clubs of Selkirk and Gimli for many years, Life Member of Chatfield Oldtimers Get Together Club, Life Member of Manitoba Baseball Hall of Fame and member of Selkirk United Church. As a Kiwanis member, he served as Secretary some 20 years, president and was recipient of Mel Osborne Fellow and Legion of Honour awards. He played baseball in his younger years and played with the Chatfield Cardinals team. In 2003, the 1952 to 1959 team was inducted into the Manitoba Baseball Hall of Fame in the small town category. Living in Selkirk, he coached Selkirk Teachers Fastball Club where one year they went to the provincials in Brandon. His involvement with baseball led to the development of a baseball diamond at the Selkirk Regional High School. He served as trustee on the SUC board, sang with the Back Pew Boys choir and did other volunteer work for the church; he had an integral part in many endeavours important to Selkirk's growth. Steven started permit teaching when he was 16 years old. His first school was at Willowview School in Narcisse, MB, which was a one room school. After permit teaching, he went back to school to complete his Grade 12, Normal School and University. After 39 years as an educator/administrator, he retired June 1988. Steven was proud of his family and especially his grandchildren who were the light of his life. The family would like to thank the doctors and staff for their kindness during Steven's brief stay at the Selkirk Regional Health Centre. Service of Remembrance will be held at 11:00 a.m. on Monday, March 5, 2018 at the Selkirk United Church, 202 McLean Ave., Selkirk, MB. Interment will be at a later date. Memorial donations, in lieu of flowers, may be made to the Selkirk United Church, Heart & Stroke Foundation or a charity of your choice. Vichnaya Pamyat Condolences, photos and videos may be left on Steven's tribute wall at www.gilbartfuneralhome.com Gilbart Funeral Home, Selkirk in care of arrangements.
Publish Date: Mar 3, 2018