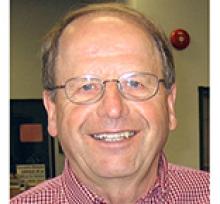 ARCHIE MILLER, DVM 1936 - 2018 Peacefully, with his wife at his side, Archie passed away at Boundary Trails Health Centre on Thursday, February 15, 2018. He is survived by his wife, Mary, his children, AJ, Rick (Lori) and Bill (Jamie), his grandchildren, Noah, Annika and Bailey, and his brothers, Bill and Bob (Shelagh). Archie grew up on the family farm near Grosse Isle, MB. He graduated from the Ontario Veterinary College (now part of the University of Guelph) in 1959. He set up his practice in Morden, where he met his wife Mary. They married in 1965 and had over 52 happy years together. Archie established the Morden Veterinary Clinic in 1960 and he was a regional veterinarian with the federal government starting in 1981. He had a very successful retirement, which started in 2001. A founding member of the Elks, he was also active in his United Church and he was previously a board member of the Boundary Trails Health Centre Foundation. He spent his summers golfing and once retired, he would go on a road trip to the US with his son, AJ every winter. He was a devoted husband and father and embraced the role of grandpa later in life. A memorial service was held at St. Paul's United Church in Morden on Tuesday, February 20 at 2:00 p.m. In lieu of flowers, donations may be made in Archie's memory to the Boundary Trails Health Centre Foundation. Wiebe Funeral Chapel, Morden In care of arrangements wiebefuneralhomes.com