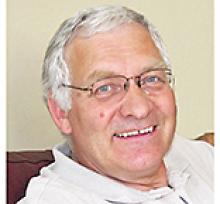 STEPHEN WALTER STEPIEN December 7, 1949 February 27, 2018 It is with heavy hearts that we announce the sudden passing of Stephen Walter Stepien, husband of Kimberly (Manshreck), at Concordia Hospital. Along with his wife of 45 years, he will be forever missed by his children, Paul (Melanie) Stepien, Sharon (Mike) Klos, Stacy (T-Jay) Raynbird. He also leaves his seven grandchildren, Joshua, Connor, Ryland, Hannah, Colin, Preston, Carter; his siblings, Teri White, Lucy (George) Beckta, Helen (Norm) Byman, Peter (Shelly) Stepien; sister- in-law Nicki Bell (Rick), and numerous nieces, nephews and dear friends. He was predeceased by his parents, Stanley and Natalia Stepien; mother and father-in-law, Gordon and Shirley Manshreck; brother-in- law Ken White; and nephew Jeff White. Steve was a compassionate, easy going, gentle soul who always saw the good in everyone and everything. He loved to tell jokes and make people laugh. He began his career at Safeway for over 20 years, but left to proudly carry on his father's fur dressing business, working alongside his dad, immediate family and son. He enjoyed playing and watching sports including golf, hockey, lacrosse and baseball. He enjoyed travelling with his family. His favourite vacation was to rent a cottage in Bemidji each year. He adored his grandchildren very much and surrounded his family with love and laughter. Memorial donations may be made to CancerCare Manitoba Foundation. A Celebration of Life will be held at Klassen Funeral Home, 1897 Henderson Hwy., Winnipeg, MB R2G 1P4, on Tuesday, March 6, 2018 at 10:00 a.m. KLASSEN FUNERAL HOME 1897 HENDERSON HWY. 204-338-0331 Condolences may be sent to www.klassenfuneralhome.com