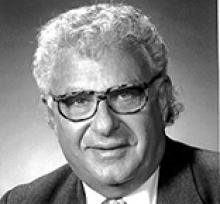 WALTER SALTZBERG Professional Engineer Born in Warsaw, Poland - January 12, 1931 Died in Winnipeg, Canada - March 8, 2018 Walter was a Holocaust survivor who lost both of his parents and an older brother because of the Nazi's goal to rid the world of the Jewish people. Walter, who last saw his family at 10 years of age, spoke very often at various schools and other venues, in the hope that his tragic war experiences would instill tolerance in people of various religious beliefs. While he basically accepted the premise "love thy fellow man", he strongly believed that it should start with a more realistic approach "let your fellow man live in peace". Walter has chronicled his war experiences and those who may be interested should speak to his son George. It was Walter's wish to acknowledge two individuals who at the peril of their own lives, saved his life during the war. Dr. Kazimierz Weckowski was a Christian doctor who smuggled Walter out of the Warsaw Ghetto when he was 10 years old and hid him in his home for two years. Dr. Weckowski was recognized posthumously as a Righteous Amongst Nations by Yad Vashem in Israel for his heroism. Peter Jablonski (Nachman Fryszberg) was a young Jewish man who saved Walter after a building they were hiding in was bombed. Peter dug Walter from the rubble and hid him in a hole underground that he built. Peter hid himself, Walter and three others there for a period of five months in that hiding space. Peter saved Walter's wounded leg by using urine as a disinfectant. He found a sack of rotten onions that became the main source of food, enabling them to survive until they were liberated in January 1945. Following years of surgeries and long hospital stays in both Poland and Sweden (to restore the use of his leg), Walter could walk again sporting a big shoe on his shorter leg. He would explain to curious children who wondered about his large shoe, "So to kick a soccer ball further". Walter came to Canada in late 1947, just short of 17 years of age, having completed only up to Grade 2 in French immersion in Warsaw. With a great deal of difficulty, years of missed education, learning a new language and financial problems, he graduated with a degree in Civil Engineering from the University of Manitoba, in 1957. He then began his 40 plus year career with the Manitoba Department of Highways and Transportation. Despite his one short leg and his difficult past, he rose to the position of Director of Bridges and Structures for the Province of Manitoba, retiring in September 1997. Walter's extra-curricular activities were numerous and included many volunteer positions with the Association of Professional Engineers and Geoscientists of the Province of Manitoba, culminating in the position of its President. He was recognized with many awards both on the Provincial and National scene. He was Past-President of the Optimist Club of Assiniboia, Past-President of the Manitoba Schizophrenia Society and Past Second Vice-President of the Canadian Schizophrenic Society. Upon retiring from the Department of Highways, Walter became International Liaison Officer with the ISIS Research Network and Associate Professor Engineer-In-Residence at the University of Manitoba. In July 2018, Walter was recognized for his lifetime of contributions in volunteering, as well as speaking about his experiences as a Holocaust survivor. He received the "Sovereign Award for Volunteers" from the Governor General of Canada, His Excellency David Johnston. This award was presented to him by Her Honour Janice Filmon, the Lieutenant Governor of Manitoba, who graciously came to the hospital to present it to him. Walter would often say," My Profession has been good to me, Manitoba has been good to me, Canada has been good to me". He was a fiercely proud Canadian. Walter was forever grateful that Canada had given him a home and an opportunity to rebuild his life. He committed himself to give back to his adopted country. Walter was predeceased by his parents, Mauryce and Anna, and his brother Jercyk, who perished in the Holocaust, his wife Sheila Greenberg Smith and the mother of his children, Joan Carole Gordon. Walter leaves his loving children, George (Timothy), Jack and Anna; his nieces, Myrna, Patrisha and Penny, and their families, as well as cousins, friends, colleagues, Sheila's family (including stepson Grant (Rhonda) and their children, Jared and Shane, and his best friend Clara Block. The family is very grateful to Evangeline, Edna, Rishpa and Merlyn, who looked after him with such incredible love and compassion. They are also very grateful to the entire staff of the Saul and Claribel Simkin Centre and especially to the team on Simkin 2 for the exceptional care he received. Funeral services will be held at the Etz Chaim Synagogue, 123 Matheson Avenue East on Sunday, March 11 at 1:30 p.m. with interment at the Rosh Pina Cemetery. Meal of Consolation will follow burial at Etz Chaim. Pallbearers will be Ron East, Dan East, Lior Avishay, Karen Vickar, Jonathan Fine and Zev Rumstein. Donations in Walter's name can be made to the Holocaust Education Centre Endowment Fund at the Jewish Foundation of Manitoba or the Manitoba Schizophrenic Society.