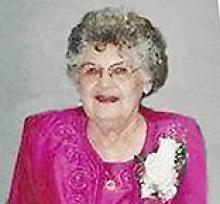 PEGGY GEORGINA MACK (nee PORTEOUS) After a lengthy struggle with COPD, Peggy passed away peacefully in her 88th year on Wednesday, March 7, 2018 at the Riverview Health Centre, Winnipeg, surrounded by her family. Peggy was born in Winnipeg on January 26, 1930 to George and Florence (Jeffery) Porteous, the second of three daughters. She was raised in Woodlands, Manitoba where she graduated from high school in 1948. After high school, she enrolled in the Central School for Practical Nurses at the Manitoba Technical Institute where she graduated as an LPN in March of 1951. On June 5, 1954 Peggy married Frank Mack of Woodlands, Manitoba and moved to Winnipeg, residing in St. Vital where they raised their two daughters. Peggy will be sadly missed and dearly remembered by her loving husband of 63 years of marriage, Frank; loving daughter Kerry (Tim) Buzunis; and cherished grandson Jarrett Mack. She is also survived by sister-in-law Elaine (Fred) Taplin of Argyle, Manitoba; her dear cousin Karen Genthon; numerous nieces; nephews; relatives and friends. She was predeceased by daughter Lori Galbraith; parents, George and Florence Porteous; sister Eraine and husband Tom Rothwell; sister Lorna and husband Doug Strachan; as well as sister-in-law Joyce Matheson. A Celebration of Peggy's Life will be held at 2:00 p.m. on Saturday, March 17, 2018 in St. Mark's Anglican Church, 19 St. Mark's Place, St. Vital with Rev. Helen Holbrook officiating. The family would like to thank Dr. R. Smith, as well as Dr. Perry and all the staff on 2 West at Riverview Health Centre that lovingly cared for Peggy during her final months here on Earth. The family appreciates your love and prayers at this most difficult time. Flowers are gratefully declined, but should you so desire, a donation in Peggy's memory could be made to the Society for Manitobans with Disabilities (SMD), 825 Sherbrook St., Winnipeg, MB R3A 1M5. Wojcik's Funeral Chapels & Crematoriums, 1020 Main Street, Winnipeg, 204.586.8668 www.wojciksfuneralchapel.com