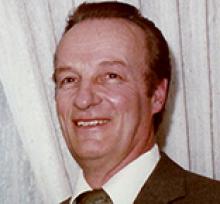 ROBERT DON MEADOWS Peacefully, on March 10, 2018, with family by his side, Robert Don Meadows, of Lake Manitoba Narrows, MB, passed away. He is survived by his son Perry (Theresa); grandchildren, Vanessa (Aaron), Sierra (Lucas), Pheonix and Miranda; great-grandchildren, Tyson, Sophia and Logan; sister Ruth; brothers, Jack and Rick; along with nieces, nephews and many good friends. Don is predeceased by his wife Norma; his parents, Edward and Elinda, of Stockholm, SK; brothers and sisters, Edward, Irene, Ethel, Lloyd and Raymond; along with other family members. In keeping with Don's wishes, cremation has taken place and no formal service will be held. A private family gathering will take place at a later date, in the United Church Cemetery, in Stockholm, SK, in their family plot. Arrangements by: ARNASON FUNERAL HOME Ashern Lundar 1-204-768-2072 1-866-323-3593