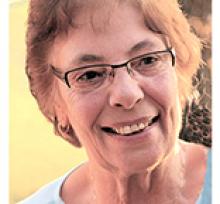 LINDA MARY ALBERTA BUTLER (nee HARD) December 19, 1942 - March 12, 2018 It is with profound heartbreak and sadness that we announce the sudden passing of our beloved wife, mother, sister and grandmother and our best friend. Linda will lovingly be remembered by her husband of 45 years, Maurice (Moe), daughter Claire Goertzen (Rob) of Morden, son Jason (Kim) of Stoughton, SK, sister Jacqui Aspinall (Bob) of Shoreham-by-Sea, Sussex, England and her special grandchildren, Emma and Luke Goertzen. She will also be missed by her colleagues and friends. Too many to list. Born in Brighton, England, Linda, a teacher came to Canada in 1967. She found a teaching position with the St. James-Assiniboia School Division and taught at numerous schools in the St. James area. Linda met another transplanted "Brit" in Winnipeg, and in 1972 Linda and Maurice (Moe) Butler a St. James-Assiniboia Police Officer were married. Linda continued teaching and Moe continued policing. In 1973 along came their first child Claire and several years later their son Jason. The family lived in St. James for the next five years and in 1978 the family made a move to Morden, MB, where Moe would become the Chief of Police, and Linda commenced her tenure with the Western School Division; teaching work education in the High School and later transferring to the Morden Middle School teaching Grade 8. It became quite evident that Linda's passion was that of an educator. She continued this career path until she retired in the 2000 after 40 years of teaching. After retirement Linda became very involved with numerous committees in Morden, including, The Corn and Apple Festival Queen Pageant, a Royal Canadian Legion member for 40 years, a member of St. Thomas Anglican Church, President of Southern Manitoba Concerts, to name but a few. Linda was a very strong determined lady, fair but firm. As a wife she was truly devoted. As a mother and grandmother she was a dedicated, caring and loving individual. She loved her garden and her roses and she treated her roses like her children with lots of attention, love and tenderness. A service for Linda will be held at 2:00 p.m. on Tuesday, March 20, 2018 at St. Thomas Anglican Church 131 - 8th Streey in Morden. In lieu of flowers, the family request that donations in Linda's memory be considered to the following: B.T.H.C. Foundation or The Morden Area Foundation. Wiebe Funeral Chapel, Morden In care of arrangements wiebefuneralhomes.com