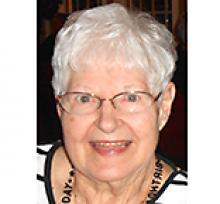 STEPHANIE GENEVIEVE PRIESTLEY (DROZDA) With great sadness we announce the passing of our Mother, Grandmother, Great-Grandmother and friend, Stephanie, on February 27, 2018 at Donwood Manor at the age of 82 years young. Left to cherish her memory are her children, Katherine, Barbara, James and Allyson (Mark), her son-in-law Steven, and her grandchildren, Laurissa (David), Shellyna (Andrew), Corbin (Maria), Stevan (Kristy), Kate-Lynn (Dylan), Michael (RJ), Brittany, Cole, Ryan and Sarah, the sender of cards and well wishes and Nana's puzzle partner of late. She was also happy to be a great-grandmother to Emily for the past three years. Stephanie is survived by her brother-in-law Harold Priestley and sister-in-law Lorna Priestley, both of Teulon, and many nephews and their families. Stephanie was predeceased by her husband Norman, her daughter Donna, her brother Stanley, her sister-in-law Sophie and her husband Christian, her brother-in-law Richard (Lorna), son-in-law Keith and most recently her nephew Thomas Priestley. Stephanie was born November 26, 1935 to the late William and Katherine Drozda in Winnipeg where she was raised and received her education. As a young woman of 19, she married Norman Priestley in September, 1955. She was a stay at home mom to their four children and was involved in her church in North Kildonan. 14 years later they moved their family to Thompson where they spent the next 10 years raising their four children and adding one more. Mom again became active in the Catholic Church and the CWL. She met new lifelong friends and for a short time worked in the office of Dad's glass business. Mom and Dad moved back to Winnipeg in 1981, settling in North Kildonan where she re-established herself in Holy Redeemer Roman Catholic Parish, the CWL and the Thursday night bowling league at Rossmere Lanes. For many years Mom canvassed for March of Dimes, Canadian Diabetes and the Heart & Stroke Foundation. Stephanie will be lovingly remembered and missed by her family and many friends. You never failed to do your best, your heart was true and tender. You lived your life for those you loved, and those you loved remember. Thank you to the staff at Donwood Manor where Mom called home the past six months. Special thanks to Janice, Chris, "Rick", Angel, Fosh, Sharon and Albert. She appreciated all that you did. Cremation has already taken place. A Celebration of Life service will be held on Saturday, March 31, 2018 at 2:00 p.m. at Klassen Funeral Home, 1897 Henderson Hwy. In lieu of flowers, if friends so desire, donations may be made in Stephanie's memory to a charity of your choice. KLASSEN Funeral Home (204) 338-0331 Condolences may be sent to www.klassenfuneralhome.com