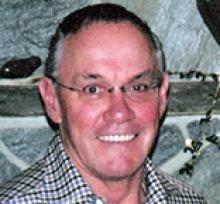 JAMES (JIM) GORDON NIELSEN Born May 10, 1944, to Gordon and Edna Nielsen; brother to Shirley Christensen and Marilyn Nielsen, died peacefully on March 10, 2018 at Pasqua Hospital, Regina, Saskatchewan. He attended school in Goodlands, graduated from high school in Waskada and went to the University of Manitoba in Winnipeg, MB where he took his Degree in Agriculture. In 1972 he completed his Masters of Soil Science. In 1969 he married Viola Marie Breakey, daughter of Bernice and Alfred Breakey of Napinka, MB. Jim started farming in partnership with Gordon and Edna in 1966 and continued to farm both actively and passively until his death. He also worked for the University of Manitoba, The Manitoba Department of Agriculture, Canadian International Development Agency, as well as establishing his own Consulting Company from which he worked internationally, as well as in Canada, both in the fields of agriculture and in environmental impacts. Jim valued family above everything else. His most cherished memories were of times spent in hockey rinks, at festivals and performances watching and supporting his children during their many activities. His special relationship with Viola resulted in successful business and personal endeavours that took them around the globe over the course of their 48 years together. In his later years, Jim suffered from Frontal Temporal Dementia and lived at Riverbend Crossing Memory Care Community in Regina. Jim is survived by his wife Viola; their three children, Jennifer (Boris), Erica (Vince) and Christopher (Bridget) and seven grandchildren, Katarina, Avery, Olivia, Benjamin, Mila, Grace and Finley. Memorial service was held Monday, March 19, 2018 at the Deloraine United Church, Deloraine, Manitoba at 11:00 a.m. A private family interment took place at Goodlands Cemetery, Goodland, MB. Donations in memory of Jim may be made to the Goodlands Cemetery Fund, or to a charity of one's choice. Messages of condolence may be made online at www.wheatlandfs.com. Smith Funeral Home (204) 747-2088 www.wheatlandfs.com