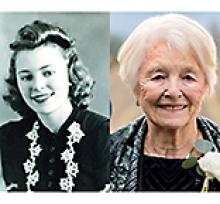 EILEEN CHARLOTTE COLLINS (nee LANDERKIN) It is with profound sadness that the family of Eileen Collins (nee Landerkin) announces her passing on March 27, 2018. Eileen was born on April 22, 1923 and raised in Purves, MB, the oldest of four daughters of Clifford and Helen (Burton) Landerkin. In her youth she worked alongside her father as he operated a general store, grain elevator and implement dealership in Purves. She attended United College and taught school briefly before marrying Arnold Collins of Pilot Mound in 1942. They embarked on a life partnership, raising eight children and owning and operating several businesses and a farming operation in the Pilot Mound area. Eileen was a remarkable woman. In addition to raising her large family, she spent a lifetime contributing to her community of Pilot Mound alongside Arnold. In 2006, she was invested into the Order of Manitoba, in recognition of her outstanding contributions and volunteerism. Last year, the Town of Pilot Mound named a street in her honour - "Collins Way". Eileen was predeceased by Arnold in 2007. She will be greatly missed by her eight children and their spouses: Rod and Linda Collins, Doug and Ginger Collins, Gene and Melody Collins, Jan and Irene Collins, Merrilee and Bruce Stuart, Burton and Rosemary Collins, Lisa Collins and Derek Clarke, Tammas and Lisa Collins. She will also be missed by her much loved grandchildren who adored her: Cameron Collins, Mark Collins, Delaney Collins, Shawn Collins, Nichole Collins, Lyndsey Collins, Melissa Collins, Derek Collins, Marcy Dees, Paul Kozak, Darin Kozak, Raegan Stuart, Jana Stuart, Erin Neale, Jordan Stuart, Kennedy Collins, Carson Collins, Reise Collins, Michelle Clarke, Melanie Gilbey, Graeme Clarke, Jocelyn Keinanen, Aimee Ramage, Brooke Gelo, Brant Collins, Brayden Collins, and their spouses. Eileen also leaves as part of her legacy 35 cherished great-grandchildren, with more on the way! She will also be missed by her many nieces, nephews and friends who held her so dear. We are grateful for her wonderful life. Eileen's 95th birthday was to be celebrated by the family in a few short weeks on April 22, 2018. She was the matriarch of our family and we will miss her unconditional love and wise counsel and guidance. Family, friends and the community will gather to celebrate her life on Thursday, April 5, 2018 at 2:00 p.m. at the Pilot Mound Kinsmen Hall. In lieu of flowers, the family would appreciate a donation in Eileen's memory to the Pilot Mound Millennium Recreation Complex, a project near to Eileen's heart. (Payable to Municipality of Louise and mailed to PMMRC, Box 450, Pilot Mound, MB ROG 1P0, with notation in memory of Eileen Collins). Wheatland Funeral Service 204-825-2848 www.wheatlandfs.com