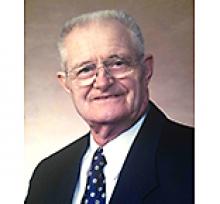 JOHN J. SIEMENS 1921 - 2018 On Monday, March 26, 2018, at Tabor Home, Morden, John J. Siemens, aged 96 years, of Winkler, MB, our beloved father, grandfather, and great-grandfather, passed away peacefully. He leaves to mourn five children, seven grandchildren, three great-grandchildren, three stepgrandchildren, and one stepgreat-grandchild: Vernon and (Linda) Siemens; Nathan, Jason and (Bridget) with Arielle; Alvin and (Audrey) Siemens, with Ian (Paige) Dubois; Rita and (Rob) McEwen; Norman and Susan (Kenny Siemens) Siemens; Trevor, Trenton and (Rita) with Jaden and Olivia; Andrea and (Matt) Duda; Chris and (Chandra) Kenny; Nicole and (Scott) Makinson with Sophie; Jon Kenny; Edwin and (Debbie) Siemens with Jessica; one brother-in-law Menno and (Nettie) Janzen of Winkler; one sister-in-law Irene Peters of Winnipeg; one brother-in-law David Martens of Germany; and cousins, nieces and nephews. He was predeceased by his wife Elly (nee Janzen) November, 2014; his birth parents, Johann F. and Maria Enns; adoptive uncle and aunt Johann A. and Cornelia Regehr and their three daughters, Beth, Lydia, and Nellie; adoptive parents, Rev. Jacob J. and Eva (d. 1931) Siemens; and stepmother Maria Peters. He was also predeceased by six siblings: Jacob, Johann, Elizabeth, Maria, Anna, and Heinrich (Betty); adoptive sisters, Eva (Nick), Nettie, and Anne (Ike); stepbrother Victor and (Elizabeth); stepbrother John; brother-in-law and sister-in-law Rudy and (Katy). John was born on November 16, 1921, in the village Lavarow, in the region of Stavropol, in southern Russia. He was the youngest of seven children. His birth parents passed away before he was a year old, of typhus, and he was given to his uncle and aunt while still in southern Russia. He was then adopted by the Siemens family who moved to Canada in 1924, settling in the Winkler area. In 1931, Rev. Jacob J. Siemens' wife Eva passed away, after which he married Maria Peters, a widow with two sons, in 1932. John was baptized on May 24, 1942, upon the confession of his faith and became a member of the Winkler Bergthaler Mennonite Church. He served in the church in many different capacities. John had a strong faith in God and was a man of character, principles and Christian values. On June 4, 1950, he married Elly Henrietta Janzen, daughter of John J. and Katharina Janzen and they resided in the Winkler area, where they farmed and he drove school bus for 20 years for the Garden Valley School Division. They were blessed with five children, four sons and one daughter. John and Elly farmed until their retirement and moved into a condo in 1997. A few years after retiring, Elly moved to Salem Home in Winkler, where she lived for 15 years. John visited Elly every day and brought her many flowers and produce from the garden which he spent many hours working in. John enjoyed singing, playing chess (winning several southern Manitoba chess championships), stamp collecting, reciting poetry and gardening. Funeral service will be held at 2:00 p.m. on Monday, April 2, 2018 in the Winkler Bergthaler Mennonite Church, 252 Sixth St., Winkler, MB with interment to follow at the Winkler Cemetery. As a family, we would like to thank all the health care professionals who gave Dad such excellent care. These include the Home Care team, Boundary Trails Health Centre, Notre Dame Hospital and Personal Care Home and Tabor Home. Thank you to Wiebe Funeral Home. Thank you also to the many family and friends who visited and supported us with your prayers and kind words of sympathy - we are deeply grateful. In lieu of flowers, donations may be made in John's memory, to Tabor Home or Notre Dame Personal Care Home. Wiebe Funeral Home, Winkler In care of arrangements wiebefuneralhomes.com