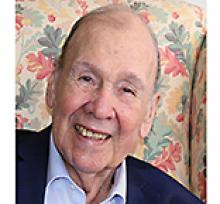 THE HONOURABLE DOUGLAS DONALD EVERETT August 12, 1927 - March 27, 2018 Douglas Everett was a man of uncommon imagination. His flexible and singular way of thinking informed his success in business, politics, life, and love. Appointed to the Senate at age thirty-nine by Lester B. Pearson, he was, at the time, the youngest person ever to be called to that office. Drawn to politics by a profound commitment to liberal ideals, he was guided by the principle that government exists to help those in society least able to help themselves. He believed the Senate played a crucial role in influencing social policy. A vigorous supporter of free trade, open borders, individual and women's rights, he consistently voted his conscience, leading to his decision in 1990 to sit as an Independent. In keeping with his high standards of personal integrity, he turned his Senate salary back to the Crown after stepping down as Chair of the Senate Committee on National Finance, a position he held for fourteen of his nearly thirty years service in the Upper Chamber. His life passion was the family business. An entrepreneur at heart, he transformed the car dealerships he inherited from his father into a multi-faceted private, corporation which today includes one of Canada's largest independent gasoline retailers, a real estate development and property management company, and a water purification business. Douglas Everett was a consummate merchandiser. His 'Jump to the Pump' philosophy permeated his career and was the foundation of the companies he built. One of his great gifts was the ability to surround himself with exceptional people. A tough and demanding leader, he was deeply respected by all who worked with him and many of the people he employed had careers at the company spanning thirty or forty years. He was as fiercely loyal to his employees as they were to him. Doug was attracted by bright minds and differing perspectives. He revelled in the thrust and parry of debate but was ever a true gentleman. He possessed a wry sense of humour. He was always ready to be amused by a funny story, his mouth curving up in anticipation of the laughter to come. His own laugh was contagious. Born August 12, 1927, he attended the Royal Canadian Naval College at Royal Roads and rose to the rank of sub-lieutenant. He graduated from Osgoode Hall and the University of Manitoba Law School and was a member of the bar in both Manitoba and Ontario. He was inducted into the Manitoba Business Hall of Fame in 2017 and received an honourary Doctorate of Laws from the University of Manitoba that same year. A strong believer in giving back to the community, he quietly supported numerous causes that make Winnipeg a better place to live. He was a collector of fine art, he loved swing music, cooking, summers in Minaki, and time spent in London where lifelong friends were made. Above all, Dad adored his family. He married his first love, Patricia Gladstone, in 1952 and together they raised six children. Intuitively, Dad understood the lasting importance of making life fun, creating memories, and marking the special moments that made childhood magical. From the time we were small, multi-family, multi-generational celebrations were an important and integral part of our lives, whether it was gatherings with the Everett, Pennock, and Catlett families, Christmas parties at 514 followed by dancing, and more often than not, bacon and eggs at 2:00 a.m., or spontaneous midnight picnics with blazing bonfires and swimming under starry skies at the lake. Dad always felt he was lucky in life. We feel we are the lucky ones. Dad was one of those very few people fortunate enough to find love a second time. Like Patty, Lila made Dad's life a joy! Survived by his wife Lila (Goodspeed) Everett, his six children, twelve grandchildren and their partners: Sarah (Don Barber, Kaitlin and Christopher), Bethan (Hal Brown, Kyle, Kirsten, and Dominic Aikman), Ashleigh (Stuart Murray, Sarah (Liam Mulhall) and Hayley), Jane (Carl Hodge, Daniel and Laura Cameron), Douglas, (daughter Annie), Kate (Dave Findlay, Andrew and Zoe); his two great-grandchildren (Quinn and Huxley Mulhall); and his step-children, Melanie Derwin (David, Nathan, Kohan) and Jonathan Goodspeed (Alison, Hunter, Noah, and Bennett), he will be deeply missed. Heartfelt thanks to Joni Williams and her husband Clyde, longterm assistants to Dad both in his business and his personal life; and to all those who provided Palliative Care, especially Allan Carandang, Eric Yumul and notably, Claudia Kubel for her many years of care and friendship to our family. As Doug was a strong supporter of neurodegenerative research at St. Boniface Hospital and of the many collections at the Winnipeg Art Gallery, donations in his honour, if so desired, would be greatly appreciated. A Celebration of Life will be held at 11:00 a.m. on Thursday, April 5, 2018 at St. George's Anglican Church, 168 Wilton Street, Winnipeg.