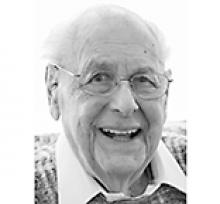 SAUL CHERNIACK January 10, 1917 - March 30, 2018 Peacefully and at home, Saul Cherniack, PC, CM, OM, QC, passed away at the age of 101. He lived a full and fulfilled life. He leaves his partner, Myra Wolch; his sons, Howard (Laurie Kahn) and Lawrie (Bea); his grandchildren, Katie (Grant Prairie) and Jennie (Matthew Williamson); and his great-grandchildren, Isaac and Oliver Prairie-Cherniack, and Sybil Cherniack-Williamson. He was married to Sybil Cherniack for 59 years until her death in 1997. He was predeceased by his parents, Joseph Alter and Fanya Cherniack, and his sister Mindel Sheps. Saul enjoyed the privilege of growing up in a loving, intellectually stimulating, and socialist family, who taught him the importance of dedicating his life to the betterment of others, with the tenet that their privilege conferred the responsibility of sharing it with others. He acted in semi-professional left-wing theatre in the 1930s, participated in Yiddish cultural activities, and was active within the Jewish community locally and nationally. Saul was driven in his passion to help others. He was a lawyer for over 50 years. During the Second World War he became part of the Intelligence Service helping to translate encrypted Japanese messages. After the War, he acted on behalf of Japanese-Canadians seeking reparations for property taken away from them during the war. He committed his whole life to the socialist movement of the CCF and its successor the NDP. He served as a school trustee in the Winnipeg School Division, a Winnipeg City alderman, a Councillor of the Metropolitan Corporation of Greater Winnipeg, and finally as a Member of the Manitoba Legislative Assembly from 1962 to 1981. In the Legislature he served as a significant member of the opposition, and then as Minister of Finance, Minister of Urban Affairs, and Deputy Premier, in the cabinet of the Schreyer government. After Saul retired from politics in 1982, he was chair of Manitoba Hydro, a founding member of the Security Intelligence Review Committee overseeing Canada's spy agency, and later a member of the Manitoba Hydro Board. After he retired from public service, he volunteered in English as a Second Language classes, becoming the oldest participant, at 95 years, in the Winnipeg School Division. Saul was a statesman, respected by many, including his political opponents. Although he was extremely popular as a politician and was elected with increasing majorities to the Manitoba Legislature, what was most important to him was not getting elected but doing the right things and acting according to his socialist principles. At a tribute dinner on his 100th birthday, he emphasized in his speech the importance of the NDP's continuing as a movement rather than just a political party seeking power. Saul could not have accomplished what he did without the love and care he received from many people, especially his mother and father and sister, Sybil and Myra. Although it was difficult for him to see his contemporary friends pass away during his lifetime, over the years he developed friendships with younger people, too many to mention, who adored him and kept him young right to the end of his life. His grandchildren and great-grandchildren gave him great joy. Special thanks are due to his long-time family friend, Virginia Stadnick, his ESL friend Marcella Mangareli, Dr. Quy Doan, wonderful health care helpers, Fe, Sally, Keith, Mary, MaryAnn, Kathy, Maia, Donnah, and Tess, and the excellent care from the Palliative Care Team from the Winnipeg Regional Health Authority. There will be an informal come-and-go gathering of family and friends at the Royal Manitoba Theatre Centre, 174 Market Avenue, on Sunday, April 15, between 1:00 and 4:00 p.m. Those wishing to honour him can do so by contributing their time and energy to social justice issues.