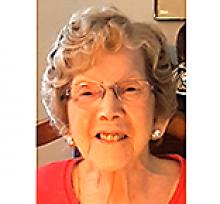 LOIS EVELYN SMELLIE (nee COCHRANE) July 27, 1925 - April 3, 2018 Lois Smellie passed away peacefully at Extendicare Tuxedo Villa after a brief illness. She was born in Russell, Manitoba to Stuart and Margaret Cochrane (nee Berrington) and grew up in Silverton where her father ran a general store. She attended high school in Russell while living with her grandmother. During the Second World War, Lois taught school on permit for a year in Clarkson, then attended Normal School in Winnipeg for teacher education, and resumed teaching in Rossburn. She married her high school sweetheart, Robert Smellie, after he returned from overseas serving with the Winnipeg Rifles. They lived in Brandon and then Winnipeg while Bob attended Law School, and eventually returned to Russell where Lois resumed her teaching career once her youngest was in school. The Smellies had three daughters, Susan (Tsugio Kurushima) living in Victoria, BC, Carol (George Gamby) of Winnipeg, and Linda (Doug Gage) in Calgary. She leaves six grandchildren, Carmen Kurushima (Scott Johnson), Bradley Kurushima (Annika), Scott Gage (Jaime), Graham Gage (Jennifer), Christopher Gamby and Andrew Gamby. Great-grandchildren are Emily and Gordie Gage and Jameson and Maclain Gage. Lois's family moved from Russell back to Winnipeg in 1963 when Bob was in government. Once again she was back teaching in St. James. She was an active member of Sturgeon Creek United Church in the choir and UCW. Lois was a member of Lioness, IODE, Toast Mistress, a volunteer for Heart & Stroke, and joined in many other community activities. Once on her own, she worked briefly in the office at McMahon Carpets, the office of the Premier, and then in the government Department of the Environment until her retirement. She spent many hours with her grandkids exploring the many playgrounds in the city, caring for them while her daughters were away on holidays, sometimes coming along on holidays, enjoying weekly Sunday dinners, and visiting Calgary or Victoria for Christmas. Lois has been delighted with attention from her extended family, with photos and cards, letters and postcards, and visits by those far away. Her birthday in July was often celebrated by family coming home to Winnipeg. Lois was predeceased by her younger brother, Bob Cochrane, but is survived by her sister Sybil Stroud and nephew Claire Stroud (Kathy) of Roblin, niece Tannis Fortin (Rob) in Winnipeg and their families.. Lois became an active member of the Westworth United Church congregation, lived at the Wellington for a few years and at Tuxedo Villa for the past six years. We wish to thank the staff at Extendicare Tuxedo Villa for the caring attitude and expert attention Lois received while she resided there. Lois will be sadly missed by all who had the privilege to know her, always the Lady, always a teacher and friend, and grateful for the love of her family. There will be no formal service at this time. Cremation has taken place and the family will hold a Celebration of Life in summer when we are together.