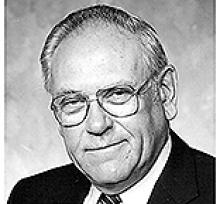 HERBERT JOHN BECKHAM Peacefully, on the morning of April 5, 2018, John passed from this life and went on to the waiting arms of his Redeemer. John suffered a heart attack on March 1 and underwent quadruple by-pass surgery to overcome congestive heart failure. Sadly, in the ensuing weeks he contracted pneumonia and was unable to overcome the challenges of recovery. John was predeceased by his beloved daughter Elizabeth in 2014, and is survived by his wife Eleanor (nee Harris), his children David (Anne-Marie), Cara Jane (Robert) and Mark, his son-in-law Jerry Buckland, his grandchildren Daniel Buckland, Matthew and Katherine Funk and Kate Beckham, and his brother Sheldon James Beckham. John was born at home in Belmont, Manitoba in the winter of 1930 to George and Edith Beckham. He grew up on the farm during the depression era and the war. In 1956 John came to Winnipeg to apprentice in carpentry. He worked in the construction and home building industry. John entered the real estate industry in the early 1960s and went on to become a successful and well respected agent in Winnipeg. He had a reputation as an honest man and one who would treat his customers with integrity. Even while his real estate career flourished, he continued to farm his land in Belmont. He was an excellent steward of the land and grew many fine crops. He planted his first crop in 1946 with a team of horses and a plough. He met his wife Eleanor Harris at a gospel meeting in Brandon, Manitoba in 1957 and they were married in October of 1958. They remained happily married for 59 years. Eleanor was at his side in the final hours of his life. They raised four children together and had many happy years. Their love was on display for all to see and admire right to the very end of his life. Above all else, John was a devout and deeply committed believer in Christ. He came to the Lord in August of 1952 and for 66 years he lived his devotion and faith in the most profound way. He loved to read his bible and became somewhat of a scholar over the years. He studied the many writers and Christian philosophers of the faith and did considerable writing on the subject of Christianity. Although his formal education only went to grade 8, he had a brilliant mind which he kept intact and undiminished to the very last day of his life. Over the years he wrote many newspaper and magazine articles on a wide array of subjects ranging from faith to farming to politics. John was a kind and generous man who loved his family and his faith and stayed true to both for the length of his life. He will be missed greatly and has left an emptiness in our hearts with his passing. He was a larger than life presence and left an impression on everyone he met. The family wishes to express its profound appreciation for the staff at the Asper Institute at St. Boniface Hospital for their outstanding care during John's stay and in particular to Dr. Johanne Strompher whose kindness and compassion helped to guide the family and to comfort John on his final day, and to his nurse Kristen who stayed past her shift to be with him to the end. Funeral service 1:00 p.m., Thursday, April 12, 2018 at Bardal Funeral Home. Interment will take place at Hillside Cemetery, Belmont, Manitoba. Bardal Funeral Home 843 Sherbrook St., 204-774-7474 Condolences www.bardal.ca Parking behind funeral home