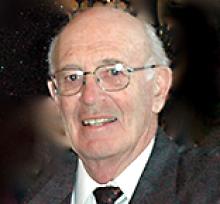 JOHN ROBERT STRATTON, M.D. December 16, 1925 - April 8, 2018 John Robert Stratton passed away peacefully, at Berwick House in Victoria, BC, on April 8, 2018 after a short illness. John was predeceased by his wife Shirley (nee Leslie) in March 2000, but not before they celebrated 50 years of marriage. He is survived by his four children, Jill Stratton, Judy Lister (Eric), Diane Stratton and Geoffrey Stratton (Mary Lee). He had eight grandchildren: Danica (Mark), Josh (Natalia), Brodie, Christopher (Emma), Courtney, Matthew (Rachel), Amy and Tyler; and seven greatgrandchildren: Smith, Carter, Isaac, William, Jones, Charlotte and Nicola. Also left to mourn are his sisters Pat and Barbara, and his brother David. He will be fondly remembered by numerous other family members, friends, former patients and acquaintances. John was born in Teulon, Manitoba and grew up in Carman and Stonewall. He attended the University of Manitoba where he graduated from medical school in 1949. Soon after he married Shirley, and they moved together to Morden and then Killarney where he practiced until 1967. John was particularly proud of the public health initiatives he introduced in the area. Killarney had a special place in his heart. The family moved to British Columbia in July 1967, first to Nanaimo, then to Victoria, where John joined a large clinic and remained there until his first retirement in 1986. He was among the first wave of physicians to pursue a specialty in Family Medicine. In his semi-retirement, he continued to perform surgical assists several days a week. Once fully retired, he returned often to his roots, surprising many old friends, family and patients with his (usually) unannounced visits. At his 90th birthday celebration he had a chance to visit with friends from his youth, his young adulthood, his middle years and his later years, as well as numerous family members. John was active in his community, serving as chairman of the School Board, elder in his church and in other roles in Killarney. He was always physically active, curling, playing golf, ping-pong, tennis and badminton, as well as running and, in later years, continued with his daily walks. He was an avid bridge player for most of his life. He was a talented artist who had great success with water colours. Many family members were grateful recipients of his paintings, and friends looked forward to his annual Christmas cards that featured his work. Throughout his life he loved music, and in later years performed weekly concerts at several homes for seniors. His last concert was just last summer. The family wants to thank the wonderful staff at Berwick House for making John's last few years so enriched. There will be no formal service. Should you wish to honour John's memory, please feel free to donate to Cystic Fibrosis Canada or a charity of your choice.