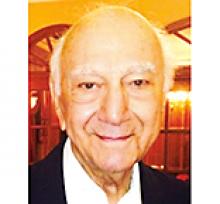 DR. SAMUEL R. LOSCHIAVO, C.M. Peacefully, with loving family at his side, after a short illness; it is with profound sadness we announce the passing of Samuel, of Winnipeg, on Monday, April 9, 2018 in the Grace Hospital at the golden age of 93. Sam is survived by his loving wife Hilda (nee Pankhurst) of 68 years of marriage; son Ken; cherished grandchildren, Carolyn (Chris), Erin, Karen (Jeff), and Michael (Beth); and daughter-in-law Rosemary (Jim). He was predeceased by son Larry (1990); father Frank (1987); mother Catherine (1992); daughter-in-law Rosemary (2015) and sisters-in-law, Sylvia (2008) and Cordelia (2009). On June 28, 1924 Sam was born in Transcona, Manitoba. He earned three degrees, including a doctorate at the University of Manitoba. He served in the Canadian Officers Training Corps while at university in preparation to joining the Royal Canadian Air Force. As a postgraduate student he received a bursary and a research award from the National Research Council. Sam specialized in entomological and nutritional research in Ottawa, Winnipeg, the University of Wisconsin, and the University of Hawaii. He authored or co-authored 77 scientific papers in 19 peer-viewed scientific journals including, Nature, and co-authored a book chapter on insect nutrition. He has a US patent and a Canadian Crown patent for inventions related to his research and has collaborated with colleagues in eleven countries. On radio broadcasts and in farm-oriented articles Sam has provided advice on stored-product insect outbreaks and spoilage in grain stored on farms, in country and terminal elevators, or transported in the holds of grain-carrying ships. He has been an adviser on academic and work-related committees, and a judge or coordinator for Manitoba High School Science Fairs. Sam has served as president of the Entomological Societies of Canada and of Manitoba, member, and committee chairperson of several scientific and professional societies, named as a Fellow and Honorary Member of the Entomological Society of Canada, Honorary and Life member of the Entomological Society of Manitoba, and held a lifetime appointment as Honorary Professor at the University of Manitoba. He was a scientific authority for research at Simon Fraser University and at American universities and US research centres. Sam served in many community organizations and was a founder or co-founder of many, including, the still very successful, Folklorama. He was chair of several committees, vice-president of the Citizenship Council of Manitoba and the Folk Arts Council of Manitoba. He served on the Board of Directors for Citizens Against Impaired Driving, Manitoba Opera Association, Villa Rosa, Manitoba Grants Advisory Council, and the Manitoba Historical Society. He was one of the founders of the Italian Canadian League of Manitoba, Heritage Committee, Memorial Foundation, and the Ethno-Cultural Committee for the Winnipeg Centennial Library. Sam was a founding trustee of the Ronald Houston Memorial Fund, treasurer of the Senior Writers Group at Creative Retirement, and co-editor of its publication, Autumn Leaves. In 1991 he was one of 25 Canadians to receive a citation and gold pin from the Government of Canada in recognition of his work in the cause of citizenship and volunteerism. Sam has received many awards, plaques, and certificates for his professional and community service. In 2000 he received Canada's highest civilian honour in being named to the Order of Canada. In 2002 he was awarded the Queen's Golden Jubilee medal and 2012 the Queen's Diamond Jubilee medal. Sam always believed that the quality of individuals is best measured by the way they behave towards those they do not have to impress. He defined success as the degree of satisfaction with one's life. He valued integrity and high ideals. A strong social conscience placed him on the side of those treated unfairly or unjustly in society. Sam believed that we should respect a person's individual worth as a human being. He was the patriarch of his family, and his extended family, and was always quick to help with advice whether solicited or not. He was even instrumental in much of the writing of this obituary as he was a stickler for details. Proper English and correct grammar were very important, and you were promptly corrected should you make a mistake. He was also quick to offer financial assistance, as required, to family-in-need as he wanted to keep it in-the-family rather than pay interest to a bank. Sam loved to travel with his wife, Hilda. They were in Europe a few times, in Hawaii several times including a one-year sabbatical at the University of Hawaii, Cuba, Mexico, all over North America, and many boat cruises in various world locales. He used to be a talented player of the accordion and left behind for us many fond memories of jam sessions with his uncle and friends. Life, of course, had some major setbacks the worst being the passing of his first-born son Larry at the young age of 36 in 1990 from cancer. Sam was never the same after that, but he was proud of the fine job his daughter-in-law Rosemary did in raising their girls to the fine women they are today. His other setback was the gradual loss of his hearing and eyesight because he was always a voracious reader and writer. At his adamant request there will be no funeral service other than a graveside family gathering where he will be interred close to his son Larry in Brookside Cemetery. If people wish, they may contribute to the Lawrence F. Loschiavo Bursary Fund at the University of Manitoba, or to a charity of choice. Wojcik's Funeral Chapels & Crematoriums, 2157 Portage Avenue, Winnipeg 204.897.4665 www.wojciksfuneralchapel.com
Publish Date: Apr 14, 2018

DR. SAMUEL R. LOSCHIAVO, C.M. Peacefully, with loving family at his side, after a short illness; it is with profound sadness we announce the passing of Samuel, of Winnipeg, on Monday, April 9, 2018 in the Grace Hospital, at the golden age of 93. A longer obituary notice will follow in Saturday's newspaper edition. Wojcik's Funeral Chapels & Crematoriums, 2157 Portage Avenue, Winnipeg 204.897.4665 www.wojciksfuneralchapel.com
Publish Date: Apr 12, 2018