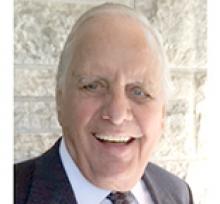 VERN SIMONSEN Vern passed away peacefully on April 8, 2018 at Grace Hospice. He is survived by his wife Ann, children Karen (Michael Dow), Paul, Lise and Christine (David Rochette), grandchildren David Christiansen (Elizabeth), Scott Christiansen, Michael Christiansen, Cleo Syverson, Jack Syverson (and their father Dean Syverson), Michèle Rochette and Marc Rochette, stepgrandchildren Gillian Romeo (Anthony), Katherine Dow and Elizabeth Dow (Will Coombs), and great-grandchildren Henry Christiansen and Joseph Romeo. Born in 1931 to Simon and Anna Simonsen, the fifth of their eight children and the first to be born in Canada, Vern was raised on the family farm near Redvers, Saskatchewan - as he would spend the rest of his life enjoying telling anyone who would listen. Growing up on the farm during the Great Depression was a defining experience for him. After attending a one-room schoolhouse in his early years, Vern carried on to Luther College in Regina and Dana College in Blair, Nebraska. He then worked as a high school teacher in rural Saskatchewan and The Pas, Manitoba. It was during this period that he decided to enter law school. He won the University of Manitoba Gold Medal in Law and was called to the Bar of Manitoba in 1959. From 1959 to 1982, he practiced civil litigation, first with Scarth, Honeyman, Scarth and continuing with the firm until it eventually became Scarth, Simonsen, Dooley, Olson and Weins. He was President of the Law Society of Manitoba from 1973 to 1974. In 1982, he was appointed a judge of the Manitoba Court of Queen's Bench. He continued to work as a judge until his retirement in 1997. Vern loved the law, and lawyers. He believed in the profession, the role it played, and the good it could do. And he thoroughly enjoyed the collegiality, whether it be at a curling or baseball event, or shooting the breeze with lawyers in his judicial chambers. Vern was very proud of his Danish heritage, and appreciated everything Dansk. He served as the Honorary Danish Consul in Manitoba for many years. He also contributed to his community as a supporter of youth sports teams, a school trustee with the Tuxedo School District, a member of the Winnipeg Police Commission, and co-founder of Tennis Seventies. He loved the family cottage at West Hawk Lake, the clear skies of Palm Springs, and cooking great food in his kitchen. But first and foremost, Vern was a family man. He was dedicated to his family beyond words, always supportive, never judgmental, and an inspiring role model. His spirit was indomitable and his joy for life endless. He was tireless in his commitment to making the lives of family members better. Quite simply, Vern was a unique individual. The family would like to thank Vern's caregivers, Mafi, Lily and Jeanneth, as well as the entire staff at Grace Hospice for their compassionate care and companionship. In accordance with Vern's wishes, there will be no funeral service. A reception in his honour will be held on Monday, April 23, 2018, 5:00 p.m. to 7:00 p.m., at Niakwa Country Club, 620 Niakwa Road. In lieu of flowers, donations may be made to Pulford Community Living Services Inc., 1146 Waverley Street, Unit 5, Winnipeg, MB R3P 0P4, or a charity of your choice.