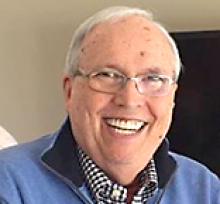 DAVID WATERS There's a beautiful baritone voice joining the angels in Heaven, with the passing of David George Harrington Waters, April 10, 2018. Best known as the Director/Producer of the CBC television national program, Hymn Sing, for 28 years, Dave felt privileged to work with the hundreds of young singers and musicians who brought glory to God every week, through music. Dave is survived by his wife Deanna, his high school sweetheart, who teamed up with him on numerous musical activities over the years, as performers and directors. He was so proud of his loving daughters, Michele MacBeath (Gavin) and grandchildren, Andrew, Heather and Meghan; and daughter Marcie Gerbrandt (Greg) and grandson Jayden. Dave was predeceased by his brother Earl Waters, and parents Annie and James Waters. He is survived by his sister Norma Duncan (Maurice) and their children and families. Dave is a BSc graduate of Iowa State University, Ames, Iowa, with majors in Journalism, Television and Film. His television career included directing and producing a variety of programs locally and nationally, including Hymn Sing, where he met people from across Canada, when the singers performed in venues across the country. He directed children's musicals with his wife, at Elim Chapel, where he served as an Elder for several terms. He also directed the choir for 12 years and added his well trained baritone voice when others took the helm. Dave served on the Board of Directors for the Children's Hunger Fund Canada, which included a mission trip to Peru. The Waters' family served in various capacities at Camp Arnes and supported Kingdom Ventures as well. Dave and Deanna spent the last 23 years building a business throughout Canada, USA, Mexico and Europe with USANA Health Sciences. This journey in leadership and service brought them together, closer than ever. They have received numerous awards from the company but were most honoured to have been given the prestigious Dr. Wentz Vision Award. This award from USANA's Founder is given to those who demonstrate a heart for people and spread his vision of a world free from pain, suffering and disease. Dave discovered 25 years ago that he was born with a heart defect that required open heart surgery, then an ablation and later a pacemaker. He didn't let that stop him from working out at the Reh-Fit Centre and participating fully in life. Dave's favourite activities included precious gatherings with family and friends at homes, on cruises, and on global business adventures. Please join us for a very special memorial service, which will include a musical presentation by several Hymn Sing alumni singers and others, as we celebrate a man of faith, integrity, love, humour and kindness. Monday, April 23, 2018, Prelude at 1:30 p.m. recorded soloist selections by David Waters; memorial service at 2:00 p.m. at the North Kildonan Mennonite Brethren Church at 1315 Gateway Road. All are invited. An informal reception will follow. In lieu of flowers, please honour Dave with a gift to your favourite charity, or to Camp Arnes, Kingdom Ventures, Children's Hunger Fund (USA) or the Elim Chapel Music Excellence Fund.