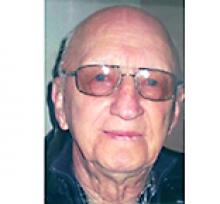 RONALD JOHNSTON April 4, 1933 - April 19, 2018 With heavy hearts, we announce the passing of Ronald Lowry Johnston (Ron) on Thursday, April 19, 2018. Ron was born on April 4, 1933 in Northern Ireland and was a father, stepfather, grandfather, great-grandfather, colleague and friend. He was predeceased by his parents Robert and Rebecca Johnston of Northern Ireland, and his wife of 38 years, Joyce Johnston. Ron was a wonderful person with an out-going personality. He could strike up a conversation with just about anyone and talk about anything with ease. He was very proud of his immediate and extended families and helped them when he could. Ron spent his childhood and teenage years growing up in Northern Ireland with his sisters Myra (Bell) and Irene (Todd). Ron attended Preparatory School in Enniskillen, Northern Ireland where he participated in various sports, was on the rugby team and took up cycling. He later joined the Royal Air Force reserves and trained on the Supermarine Spitfire Mark V. In his early 20s he immigrated to Canada where he first worked for the Canadian Imperial Bank of Commerce before joining Air Canada in 1958 where he worked for almost 34 years before retiring in 1991. Ron had a great singing voice and he enjoyed square dancing and round dancing. He became an avid square dance caller in the early 1960s, an activity he enjoyed for over 50 years. During his 50 years in the dancing community, he made many friends and instructed many people in both square and round dancing. He participated in a number of square dance clubs which included the Frontier Flutterwheels, Steinbach Daisy Chains and Whirlaway Westerners to name a few. He also attended numerous local, national and international square dance conventions. In the later years, he was widely recognized for his contributions to the dancing and square dance calling communities. Ron liked tending to his vegetable gardens where, when in season, he regularly checked them for fresh vegetables. Over the years, he enjoyed other activities such as camping, hunting, fishing, family vacations and woodworking. He always seemed to have some kind of project on the go. After retiring, Ron took up building and flying radio controlled model aircraft and became very proficient at it. One of his last aircraft builds was a 1/5 scale model of a Second World War Hawker Hurricane. Ron moved into Lindenwood Manor in January 2014 and has made many friends there with both residents and staff. He enjoyed his cribbage and bridge groups and looked forward to the weekly visits of his grandsons James and Tristan and his great-grandchildren Locklan and Lindiwe. Ron is survived by his immediate family: son Robert Johnston (Sheryl), daughter Gail Dickson (Glen), grandchildren James Magnus-Johnston (Kendra), Tristan Johnston (Tebogo) great-grandchildren Locklan and Lindiwe, sisters Myra Bell and Irene Todd, nieces Audrey (Gordon), Joan (Ian) and Patricia (Eric), nephew Ian, great-nieces Katherine, Rebecca, Zara and Holly, and great-nephews Aaron, Matthew and William. Ron is also survived by his extended family: stepsons David Allston (Debbie), Jeff Allston (Jacquie) and Randy Allston, stepdaughter Linda Meads (Bill), stepgrandchildren Jennifer, Scott (Megan), Andrew (Morgan), Nick (Sarah), Brian and Aaron, step-great-grandchildren Sahara, Andara, Lincoln, Luna and Adam. The family wishes to express their gratitude for the compassionate care given to Ron by Dr. Ralph Macek and the staff on the 5th floor of Grace Hospital. Cremation has taken place and a memorial service will be held Saturday, April 28, 2018 at 1:00 p.m. in the Heritage Room of Lindenwood Manor, 475 Lindenwood Drive East, in Winnipeg. Richard Rosin Funeral Director Ltd. 204-219-1126 richardrosin.ca