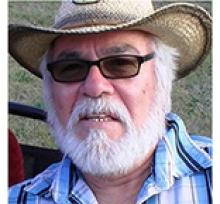 ALBERT DUTIAUME July 4, 1947 - April 23, 2018 With heavy hearts, we announce the passing of Albert Dutiaume on Monday, April 23, 2018 at the Ste. Anne Hospital Albert was born on July 4, 1947, the eldest of 12 children, to Albert and Emma Dutiaume. Albert was a son, a husband, a father, grandfather, great-grandfather, brother, uncle and friend. He was predeceased by his father Albert in 1980, brother Bryan in 1975, stepdaughter Susan in 1993. Albert is survived by his mother, Emma, wife, Ethel, children, Cindy, Audrey and Sean (Nancy), stepson, Dan (Kristel), grandchildren, Ashley, Tyler, Amanda, Riley, Bauer, Gunner and Otis, great-grandchildren, Jayden and Nevaiah, sisters, Val (Fred), Bernice (Ross), Frances (Phillip), Marlene, and Barbara, brothers, Ken, Marcel (Brenda), Jimmy (Gloria), Keith, Tom, Clint (Leslie), and numerous nieces and nephews. Albert was first and foremost a self-taught musician. He began playing professionally around 1965 and worked with many talented people that became friends. He truly loved and adored that part of his life and missed it immensely when health issues, beginning in 2009, closed that chapter of his life. The gigs and road trips with his brothers were the highlight of his music career. He was so proud of all of them, and most definitely his favourite people to work with. The memories of those times were something he always talked about. They were close to his heart. He was a kind, loving man with a heart of gold. He filled many lives with music and laughter. He was devoted to his passions in life, his kids, and especially his grandchildren. He cherished his family and the memories he made with them. He spent countless weekends and holidays taking them on trips to Fairford river. Days were filled with early mornings getting up to catch fish, having barbeques, and nights spent around the fire with his loved ones. He was a selfless man, who would do whatever he could to keep grandchildren happy. He was looked up to by many and admired by everyone who had the pleasure of meeting him. Albert was a hardworking man and always took care of his family first. Aside from his music career, he also worked at Olympic Pant & Sportswear, Days Inn and Vital Transit. This beloved man befriended all and will be missed deeply by everyone that met him throughout his life. The family wishes to thank Dr. Cooney, his nurses and all the staff at Ste. Anne Hospital for the care and compassion of Albert. John 3:16 "For God so loved the world, that He gave His only son, that whoever believes in him should not perish but have eternal life." A "Celebration of Life" will be held on Sunday, May 6, 2018 from 5:00 p.m. to 10:00 p.m. at Brooklands Weston Legion, 1613 Logan Ave. Please join us for music, refreshments and share some stories.