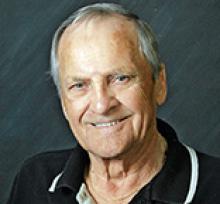 JOHN WILLIAM (JACK) CARROLL December 18, 1926 - April 17, 2018 With great sadness, we announce the passing of our husband, father, grandfather and great-grandfather, Jack, from this life. Jack will be remembered by his family and friends. He is survived by his loving wife Erika, his sons, Patrick and Douglas of Winnipeg, Derek (Dale) of Calgary and his stepchildren: Terry (Bonnie), Dean (Michelle), Kirk (stepdaughter Alexis) Hnatiw, his dear daughter Kelly (Jim) Thiessen. Jack will also be remembered by his loving grandchildren, Thomas and Laura (Stewart Nadurak) Carroll, as well as his stepgrandchildren, Brittany (Mitch) Calvert, Justine Pochuk, Chantelle and Bryce Hnatiw, and his great-grandchild Quinn Calvert. Jack is also remembered by his sister Wylla Webb and his beloved sister Karen Boughton. Throughout this vast family, he was always an inspiration, a supporter, a mediator, a motivator and was almost universally loved and respected by all. Jack is predeceased by his loving son Thomas, his stepson Doug, his stepdaughter-in-law (Kathy), his parents, Myrtle (Leader) and Thomas Carroll, his brothers, Arnold, Russell, George (aka Buss) and (his best friend) Leonard, his sisters, June (aka Dot) and Gladys. Jack was born in Treherne, MB and raised at Bagot, MB where he attended a one room school house for 10 years. During the desperately poor years of the Great Depression, Jack became convinced that a good education was the only way to escape the poverty. He completed high school at McGregor, Stockton and Portage la Prairie. In his early years, Jack worked at a variety of jobs. They included time in a BC lumber mill, time in northern Canada with the Hudson's Bay Fur Trade, in Transcona at the cordite (explosives) plant, and in Northern Manitoba in the mines. In the late 1940s Jack tried out teaching, on a permit, in northern Manitoba and decided to continue in the profession. He attended "Normal School" from 1950 to 1951 and taught for six years in rural Manitoba at such locations as: Minitonas, Flin Flon, and the Emerson area. Jack became disillusioned with rural teaching and joined Imperial Oil in the oil fields for a year before leaving and returning to teaching with the Winnipeg School Division where he taught for 33 years. During the first dozen years back in Winnipeg, he attended both night school and summer school to complete his Education Degrees. He taught at R.H. Smith, Lord Selkirk, Sommerset and General Wolfe schools, and spent a year on exchange teaching in a high school in Thetford Mines, Quebec, before returning and going into administration. During his education career, Jack simultaneously devoted six years as a member of the Winnipeg Teachers Association, serving as President from 1974 to 1975. Jack was particularly proud of a couple of achievements during this time. He chaired a committee that brought about a Long Term Disability Program for Winnipeg teachers, a plan that is the basis of the coverage for teachers all across Manitoba today. He also chaired a negotiation committee that achieved preparation time for elementary teachers in Winnipeg, the first of its kind in Manitoba. Jack was recognized for his efforts towards the betterment of teachers working conditions in Manitoba, as well for the innovative programs he initiated, and supported, for students in the schools where he taught. He was awarded the distinguished service award for those efforts by the Winnipeg Teachers Association in 1984. He was always concerned about the suitability of programs for his students, especially for those with special needs. Jack then served as Vice-Principal of Wellington and Earl Grey Schools, and as Principal of Champlain Elementary and Isaac Newton Junior High schools. His final 10 years from 1980 to 1990 were served as the Principal of Churchill High School. Jack retired from a long and very distinguished career in Education in the spring of 1990. Jack spent his almost 30 years of retirement enjoying his time with Erika and his family. He and Erika spent many years wintering in Parksville on Vancouver Island and later in Mesa, Arizona. It is Jack's wish that there be no funeral service. He will be laid to rest beside his son Tom at Chapel Lawn with family and a few friends present. There will be a "Celebration of Life" to share memories and stories at 7:30 p.m., Thursday, May 17 at Mosaic Funeral Chapel at 1839 Inkster Boulevard, Winnipeg, R2X 1R3, (204) 275-5555. In lieu of flowers, Jack has asked that donations be made to a charity of your choice in his name. 1839 Inkster Blvd. 1006 Nairn Ave. 204-275-5555