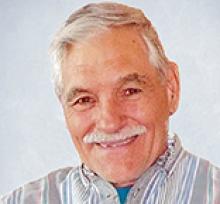 DOUG PRICE Doug Price, formerly of Onanole, passed away on Saturday, December 23, 2017, at the Brandon Regional Health Centre, at the age of 74 years. Doug was born on March 8, 1943 in Elkhorn, Manitoba. He was raised and went to school in Elkhorn. At age 16, Doug went to work in Wawanesa and McCreary. He also worked in Winnipeg and Onanole. Doug was a member of Ducks Unlimited for 20 years or longer. He enjoyed fishing, golfing, hunting and gardening until his health failed. Doug was predeceased by his parents, Mary and Art Price, in-laws, Jack and Bessie Angus, brother Wayne, and brothers-in-law, Keith and Ken Angus. Doug is survived by his wife of 54 years, Eileen, along with his two sons, Floyd of Onanole, MB and Jim (Wendy) of Winnipeg, MB, two granddaughters, Brittany (Luke) and Courtney (Cam), both of Winnipeg, two sisters-in-law, Doreen Angus of Brandon and Debbie Price of Red Deer, three brothers, Ray (Darlene) of Estevan, Tom (Debbie) of Elkhorn, Michael of Calgary, and many nieces, nephews and cousins. A memorial service will be held at the Onanole Recreation Centre, 386 Central Road, Onanole, Manitoba on Friday, May 11, 2018 at 2:00 p.m. Interment will take place at a later date in Elkhorn, Manitoba. "He will be missed by many." Arrangements are in care of Brockie Donovan Funeral & Cremation Services, Brandon, MB, (204) 727-0694. Messages of condolence may be placed at www.brockiedonovan.com