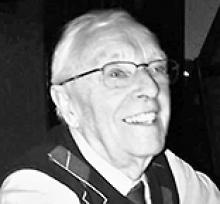 ROBERT (BOB) TOAL February 25, 1923 - April 28, 2018 Bob's heart gave up the ghost on Saturday, April 28, and he died peacefully at age 95. He was predeceased by his wife Peg, and is survived by his daughter Alison Kornelsen (Wilf) and son Ian (Barb Eastveld); grandchildren, Jarett, Sean (Lisa), Brendan (Diane), Andrew, and a mess of great-grandkids, Nolan, Stella, Liam and Emelia. Whew. Not bad for a 5'2" guy from Belfast who came to Canada in 1960 with a wife, two young kids, a table, two chairs and a carpet. It was almost only one kid as they nearly forgot Alison on a pier in Montreal. Inexplicably, they wound up in Winnipeg, where, except for a brief sojourn to Calgary, he lived the rest of his life. How to sum up the life of a sweet, contradictory man? He was a good father, husband, who worked hard to keep the family provided for in a place where they knew few people. He was dedicated, disciplined and kind. Yet in some ways, he could be hopeless - on the fly, he renovated the basement in his first house using "wee gummy", a saw about 10" long, missing about a third of its teeth. Wee gummy was formally retired, but then was called into service a few years later. An accountant, he initially found it hard to get steady work in Winnipeg. An accomplished violinist as a young man in Belfast, he taught music at night. He finally got full time work at Steel Brothers in the Lime division, the job that took him to Calgary. A few years later he moved back to Winnipeg, set up his own business, and worked as a consultant for various places until his 80s. By then Peg had dementia, and he looked after her. Bob was very active in the Masons. At Assiniboine Lodge 114 he served as Secretary, eventually becoming Master of that Lodge. He also was Secretary of the Grand Lodge of Manitoba. After 114 merged with another Lodge, he sort of drifted away, eventually quitting the Masons entirely. We would like to thank Dr. Tam for his kind advice and care, the Charge Nurse on 5A, Liz, for her compassion, and all the wonderful staff at St. Boniface Hospital for their brief but wonderful care. We would also like to thank his great friend Kelly Eldridge who managed to assuage Bob's fears that he would be bankrupt before he died. Since his final wish (to be tossed in Brady Landfill) is, shall we say, illegal, he has been cremated and will be interred with Peg in a small service this summer. He will be missed.