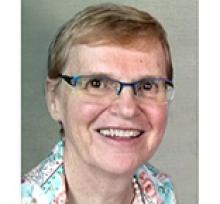 ELIZABETH DELGATTY Elizabeth Delgatty, 69, of Winnipeg, died May 9, 2018, in St. Boniface Hospital. She was born on June 18, 1948, in Flin Flon, Manitoba. Elizabeth graduated from Hapnot Collegiate in Flin Flon and received Bachelor of Science and teaching degrees from the University of Manitoba. Elizabeth is predeceased by her parents Margaret and Jack Delgatty, mother-in-law Sophie Konefall and her ex-husband Erich Mantler. She is survived by her husband Bob Ludwick, by daughter Andrea Mantler and son Tony Mantler, by Mark, Ashley (Fenske), Matthew and April Ludwick and grandchildren Sophie, Aster and Charles Ludwick, and by her siblings Doug, Bob and Janet. Elizabeth started her teaching career in Gilbert Plains, Manitoba and moved to Winnipeg in 1971, where she taught decades worth of children in River East School Division and was their beloved "Mrs. Mantler." After retirement, she developed her considerable painting skills and was an active member of the Local Colour Art Group, the Manitoba Society of Artists, and the Gwen Fox Gallery. Her favourite subjects were trees, especially birch trees. Her favourite colour was yellow and it was a feature of her life, including in many of her paintings. Her Missing Women series was exhibited in several Canadian locations and one of the paintings was chosen to be in a Canadian high school art textbook. Her works were chosen for several juried art shows and she had several one artist shows. One of the highlights of her life were the summers spent at the family cabin on Big Island Lake near Flin Flon, and especially the canoeing there, first as a child and teen and later with her beloved Bob. Elizabeth and Bob spent happy years traveling together after they retired. As a couple, they were devoted to each other and to their family. Elizabeth loved being a grandmother. A Celebration of Life will be held at a later date. Thanks to her GP Dr. Loepp, CancerCare Manitoba staff and the Palliative Care staff at St. Boniface Hospital for their compassionate care of Elizabeth. www.voyagefuneralhomes.com