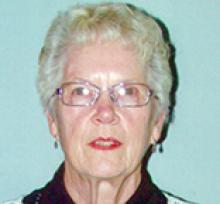 LYLA SMITH Lyla Smith was born as Lyla Patricia Gronback on December 31, 1937 in her family home on the farm six miles north of Erickson in the Danvers District. Lyla was the youngest daughter of five girls born to Paul and Elena Gronback. Some of Lyla's fondest memories were growing up on the farm having many different pets including Laddie her dog, a pet pig and a turkey named Tommy. At almost 12 years of age, Lyla and her parents moved to Carberry in 1950. Lyla married Malcolm Lloyd Smith in 1956 and they moved to Brandon and had three children, then moved to Killarney and had two more children. They lived in Killarney until 1977, then moved around to Gillam, Thompson, Boissevain then Minnedosa from 1988 to January 2018, most recently moving to Winnipeg. Lyla helped out on the family farm before she began working at age 16 as a waitress. Once married, Lyla worked as a homemaker for many years prior to moving to Killarney where she cleaned and managed the Oak Lawn cabins. Later, moving to Gillam and then Thompson, Lyla worked in the hospital. Lyla worked in the Boissevain Co-op and Bakery and then as a Health Care Aide in Minnedosa until she retired. Although Lyla was a hard worker she always made her family her priority and devoted countless hours driving to and from sports and extra - curricular activities. She loved to be involved in the community including, the Seniors community center, the red hat ladies group, the Horticultural society, Royal Purple and the United Church. Lyla loved to garden, bake, sew and crochet in her spare time as well as travel and camp. Some of the trips that Lyla enjoyed were to Europe, Alaska, Panama Canal and the Caribbean. Lyla was a loving sister, wife, aunt, mother, grandmother and great-grandmother and had many friends. Lyla was predeceased by her parents, Paul and Elena, Ethylin Beatty (sister), Doris Ainge (sister), Anne Johnson (sister), Brenda Smith (daughter). Left to mourn is her husband Malcolm, sister Violet (Soltys), son Steven (Adele); son Terrance (Corazon); daughter Karen; daughter Patricia (Daniel); grandchildren, Riley, Brady, Taylor, Diana, Jagtar, MacKenzie, Larissa, Breanne, Dylan, Josh and great-granddaughter Lily. A memorial lunch will be held on Saturday, June 9, 2018 at 1:30 p.m. in the Minnedosa United Church Hall, Minnedosa, MB. Minnedosa Funeral Service in care of arrangements. Messages of condolence may be placed online at www.minnedosafs.ca