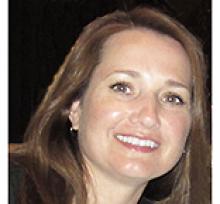 JACQUELYNN KATHLEEN LORIE GARCIA (nee BABIUK) On May 10, 2018, with her loving husband by her side, Jacquie Garcia passed away peacefully at the St. Boniface Hospital. Jacquie was predeceased by her father, Edward Babiuk, grandparents, Elana and John Storozynsky, Speridon and Oksana Babiuk, and infant brother, Stephen Babiuk. Jacquie was born on October 4, 1967 to Mildred and Ed Babiuk at the St. Boniface Hospital in Winnipeg, Manitoba. She attended Ralph Brown Elementary School and St. John's High School where she excelled at school, sports and had many close friends. After high school, she completed college and began the search for her new career. In 1988, she found her place and her second family at the Birchwood Automotive Group. She started as a receptionist, and worked her way up to accounting and eventually became Banking and Payroll Team Leader. She was highly respected, and excelled in guiding her team. Birchwood is also where she met her best friend, and love of her life Joe Garcia. Jacquie and Joe were married in a beautiful, ocean side ceremony in Playa del Carmen, Mexico, on January 20, 2005 and they began their wonderful, fulfilling life together. They loved to spend time at their lake house, travelling, and especially spending time with their family at dinners and other celebrations. Most of all, they just loved being together. Left to celebrate Jacquie's life are her devoted husband Joe, daughter Nicole (Tom), mother Mildred, sisters, Darlene (Ed) Lyseyko, Terry McNabb (Patrick Lee) and Darcia (Rich) Gillis, brother Jim Babiuk, brothers-in-law, John (Nivera) Garcia and Gil (Julie) Garcia, sisters-in-law, Maria (Joe) Simao, Filomena (Durval) Pereira, and her precious dog Bella; as well as numerous nephews and nieces. Jacquie's family would like to thank Dr. Alon Altman, Dr. Robert Lotocki, nurses Nicole Catelliet and Mare Richardson, and the entire team at St. Boniface CancerCare. A special thank you to Maria Pereira for the additional emotional support during all Jacquie's visits at CancerCare. Flowers are graciously declined. Donations can be made to CancerCare Manitoba, Winnipeg Humane Society, or a charity of one's choice. Funeral service will be held at Immaculate Conception Parish, 181 Austin St., Winnipeg, Manitoba, on Thursday, May 17. The viewing will began at 9:00 a.m., with a memorial service to follow at 10:00 a.m. Refreshments will be served following the service. Bardal Funeral Home 204-774-7474 Condolences: www.bardal.ca