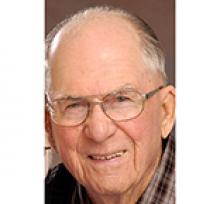 WILLIAM FRANCIS NAVEN 1925 - 2018 On May 10, 2018, William passed away at the St. Boniface Hospital. William was predeceased by his parents, two brothers and two sisters. Those left to cherish his memory are his wife Marion, son Terry (Charlotte), daughter Janice (Jim), grandchildren, Travis (Regan), Marilyn (Kevin), Kari (Jesse) and Patrick, great-grandsons, Jaxson and Cruz, as well as sister Pat, and numerous nieces and nephews. William served with the Canadian Armed Forces from 1942 to 1957. He was awarded several service medals, including the Knight of the National Order of the Legion of Honour from the Government of the Republic of France. William was very active at the Fort Rouge Curling Club, Canoe Club Golf Club, and was the past president with the Manitoba Seniors Golf Association. He worked in the Administration area at the University of Manitoba until his retirement. The family would like to thank the staff on 6E at St. Boniface Hospital, as well as Dr. Oliver Bereznay. In lieu of flowers, donations may be made to a charity of one's choice. Funeral service will be held at 2:30 p.m. on Wednesday, May 16, 2018 at Chapel Lawn Funeral Home, 4000 Portage Ave., Winnipeg, MB. For those who wish to sign the online Guest Book please visit www.chapellawn.ca Chapel Lawn Funeral Home 204-885-9715