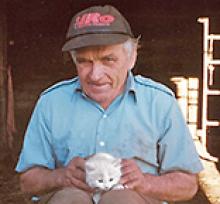 PETER PAUL ROSCHUK 1936 - 2018 On May 14, with Stella and family by his side, Peter passed away at the age of 82, at the Percy E. Moore Hospital in Hodgson, MB. Peter is survived by his wife Stella, her daughter Johanna (Rudy), Justyn Marko, sisters, Mary Kosc, Vicky Denton, Stella Locoshovich and Lorea Plishka, brothers, Kazmir and Joe (Barbara), numerous nieces, nephews and friends. He was predeceased by his parents, William and Sophia, brothers, John and Danny in infancy, sisters, Sally (Frank) and Rosie (Lucien). Funeral service will be held on Monday, May 21, 2018 at the Poplarfield Hall in Poplarfield, MB at 11:00 a.m. Interment will be at the Poplarfield Community Cemetery. Vichnaya Pamyat FISHER FUNERAL HOME INC. In care of arrangements. 204-372-6803 or 204-372-6271