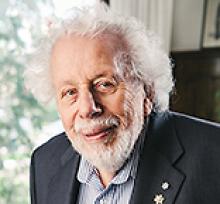 ROLAND PENNER, C.M., O.M., Q.C. It is with great sadness that the family of Roland Penner announces that on May 31, 2018 he died from complications following a broken ankle. His loving family was by his side. Roland was born in Winnipeg, Manitoba on July 30, 1924 to Jacob Penner and Rose Shapack, and was raised in Winnipeg's vibrant North End. At 19, he joined the army and served in Europe during the Second World War in the Canadian artillery. After the war, Roland enrolled at the University of Manitoba, receiving a Bachelor of Arts degree and an LL.B. Following in the footsteps of his parents, Roland was actively involved in left-wing politics, initially with the communist Labor-Progressive Party and later in life with the New Democratic Party. He spent his undergraduate days immersed in campus political and cultural activities, including being a prominent member of the Debating Society, organizing numerous political meetings on and off-campus, writing prodigiously for the student newspaper and several communist publications, and pursuing his first love, progressive theatre. Roland graduated from the University of Manitoba Law School and was called to the Manitoba Bar in 1961. He soon took up an offer from Joe Zuken, a prominent city councillor and communist, to practice with him and his partners, primarily in the field of criminal law. Also in the 1950s, Roland and his first wife Addie helped manage the Co-op Bookstore on Winnipeg's Main Street and promoted numerous concerts by some of the era's prominent folk and political musicians, including Peter Seeger, Miriam Makeba, and Sonny Terry and Brownie McGee. While still practicing law, Roland began his teaching career at the University of Manitoba's Faculty of Law in 1967. He was a Professor of Law from 1972 to 2009, teaching courses in constitutional law, criminal law, labour law, evidence, and the Canadian Charter of Rights and Freedoms. From 1972 to 1978, he acted as the Founding Chair and President of Manitoba's new Legal Aid system, during which time he helped lay the groundwork for a legal aid system that is still considered one of the best in Canada. From 1979 to 1980, Roland was president of the Canadian Association of University Teachers. He served as Dean of the University of Manitoba Faculty of Law between 1989 and 1994 and was a Senior Scholar with the faculty right up until his death. Taking yet another adventurous career trajectory, Roland was elected as a NDP member of the Manitoba Legislative Assembly in 1981. He served in the government of Howard Pawley until 1987 as Attorney General, Chair of the Treasury Board, Government House Leader, Minister of Education, Minister responsible for the administration of The Liquor Control Act, Minister responsible for Constitutional Affairs and Minster of Consumer and Corporate Affairs. As Attorney General, Roland introduced human rights legislation in Manitoba, championing the inclusion of sexual orientation as a prohibited ground of discrimination. The Human Rights Code came into force in 1987, a ground-breaking achievement of which he was always justifiably proud. Author of three books, Roland recently completed a biography of Hugh Amos Robson, founder of the Manitoba Law School in 1914, which will be published next Fall. Roland's lifetime of fighting for social justice and human rights earned him numerous awards and accolades, including being appointed Queen's Council (1972), the Order of Canada (2000), the Order of Manitoba (2014), and the Canadian Bar Association's Sexual Orientation and Gender Identity Community Ally Award (2016). Roland is survived and lovingly remembered by his twin sister Ruth; wife Janet; first wife Addie; daughters, Kathy (Rollin), Anna (Meredith) and Pen; sons, Dan (Marnie) and Paul; grandchildren, Cassidy (Gillian), Claire (Vic), David (Pam), Emily (Michael), Micah and Asher; step-grandchildren, James (Jasmine), Brett, Vic (Brendan) and Sam (Chris); great-grandchildren, Jude and Araiyah, and an extended family of nieces and nephews. He was predeceased by his brothers, Walter, Norman and Alfred, and sister Norma. Roland was a brilliant raconteur and debater, known for his wit, fierce intelligence, and gregarious nature. Ever the optimist, he was resilient and determined to live his life to the fullest. The day he broke his ankle, he was trying very hard to make it to his bridge game in spite of the mountains of snow left from the previous day's blizzard. Roland was deeply loved and will be greatly missed by his family, and many friends and colleagues. A private cremation will be held with a Celebration of Life to be announced at a later date. Roland's family extends thanks to the medical staff at Concordia and Seven Oaks Hospitals who attended him. In lieu of flowers, donations in Roland's memory can be made to the Manitoba Chamber Orchestra or the Council of Canadians. NEIL BARDAL FUNERAL CENTRE 204-949-2200 neilbardalinc.com