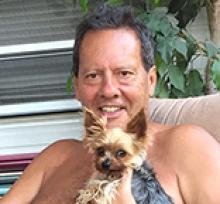 DR. ANTHONY PAUL BUCHNER September 26, 1950 - June 2, 2018 After a long struggle for recovery following a stroke, Anthony Paul Buchner passed away in comfort, at the Health Sciences Centre on Saturday, June 2, surrounded by family. Tony is predeceased by his mother Muriel Buchner (née Savill), and father Josef Buchner. Mourning his passing are his son Alex Buchner; Alex's mother Louise Pujo; fiancée Beverley Cannard; cousins, Theresa and Ulrika Birkholz, and many extended family members and friends in Canada and abroad. Tony was born in Southend-on-Sea, Essex, England, on September 26, 1950, and at age four, immigrated to Winnipeg, crossing the Atlantic with his parents on May 20, 1955, on the R.M.S Scythia. He studied Archaeology at the University of Winnipeg (B.A.), Memorial University in St. John's, Newfoundland (M.A.), and the University of Calgary (Ph.D). Through his work with the University of Winnipeg and the Manitoba Government's Historic Resources Branch, he made significant contributions to our understanding of pre-contact indigenous life in the prairies, particularly through his work with Dr. Jack Steinbring, studying rock paintings, petroforms, and the material and spiritual culture of Manitoba's first communities. Later in his career he worked as a Project Officer for the Manitoba Geographical Names Program, which released two volumes: Geographical Names of Manitoba, a catalogue of nearly 12,000 natural features and settlements, with research pertaining to the origins of their names; and A Place of Honour, published as part of the Commemorative Names Project, which officially named more than 4,200 lakes, rivers, creeks, and other landscape features after Manitobans who died in military service. Through the research conducted in this program, Tony was able to provide previously unknown details of military service and a sense of closure to many families. He described his participation in this project as one of the most rewarding accomplishments of his professional life. Tony and Louise Pujo were in a committed relationship for many years before getting married in 1984. They had one son, Alexander Buchner, in 1986. Although their marriage would only last a few years, they maintained a close friendship that would endure for the rest of his life. New love grew in Tony with a longtime colleague, Jennifer Doone. They were together for nearly 20 years, and after Tony took early retirement, they spent their winters exploring new lands, including Cuba and Puerto Vallarta, Mexico. Sadly, Jenny passed away, after a brief illness, on April 14, 2007. In future years, Tony would return to Puerto Vallarta regularly. There, he established a strong network of friends among fellow snowbirds and expats. Surrounded by the warmth of the sun and the warmth of this new community, he came to refer to Puerto Vallarta as his "happy place". Through this network, he would meet Beverley Cannard of Mindemoya, Ontario, and his heart would open up one last time. Tony and Bev spent many happy days together in Puerto Vallarta and at Bev's home on Manitoulin Island. Tony had particular affection for Bev's family: father Doug; daughter Eva; son Chad and his wife Leah; and grandchildren, Mikayla, Matteo, Damian, Michael, Jack, and Andrew. Sadly, these happy days were cut short when Tony suffered a severe stroke in 2016. We are grateful to the dedicated doctors and nurses who provided care to him in this time at San Javier Hospital in Puerto Vallarta and the Health Sciences Centre in Winnipeg. We are also immensely grateful to the staff at Selkirk's Acquired Brain Injury Rehabilitation Program. Friends and family will remember Tony for his warmth, his sense of humour, his razor-sharp intellect, and his love of music. Tony was an accomplished guitarist who played frequent gigs with John Hodgert in Winnipeg, and with the Three Amigos in Puerto Vallarta. Our lives are all richer for having known him. There will be no formal service, but a gathering will be held to celebrate his memory at a later date. If you would like to ensure you receive details, email buchner.alex@gmail.com and Alex will pass on event information when the time comes. Memorial contributions to the charity of your choice are welcome. Friends and relatives are encouraged to share in stories and condolences for the family by visiting Tony's memorial page at IntegrityDeathCare.com. INTEGRITY Cremation & Funeral Planning 204 295 5408 - IntegrityDeathCare.com