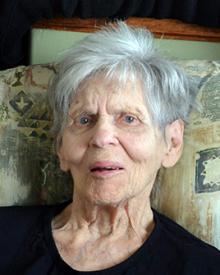 STELLA WACHNIAK (MALUK) Stella Wachniak passed away at the Erickson Personal Care Home on Friday, June 8, 2018 at the age of 97 years. Stella was the second child born to Rosie and Tom Maluk of Sandy Lake on March 6, 1921. She completed public school in Sandy Lake and was then enrolled in the P. Mohyla Institute in Saskatoon and Nutana High School. She received her Bachelor of Science Home Economics degree from the University of Winnipeg in 1944 and received further training in Ottawa. In 1947 she married Dan Wachniak from Gronlid, SK, who was enrolled in Engineering in Winnipeg. In 1950 they moved to Toronto where Stella was employed at Sunnybrook Medical Centre for 28 years, retiring in 1980. In 2010, at ages 88 and 89 respectively, Danny and Stella decided to move back to their roots - unable to choose Saskatchewan or Manitoba. They investigated the cost of funeral plots, Sandy Lakes' were $100.00 - a fraction of the cost elsewhere - so they purchased the plots and then a home in Sandy Lake. They told no one when they left Burlington and the two of them arrived several days later in Sandy Lake on June 4, 2010, driving all the way themselves. Unfortunately, they only had two years in their home before Dan had a stroke. Stella lived in her home in Sandy Lake for five years after Danny died thanks to home care and family assistance. She became a resident of Erickson Personal Care Home in March of 2016. Stella was predeceased by her husband Dan, her parents, Tom and Rosie Maluk, brothers, Eugene and Don, sisters, Ann and Lisha. Stella is survived by Eugene's wife Helen, their children, Wes (Terry) Maluk of South Carolina, Deb Maluk of Sandy Lake, Roseanne Maluk of Sandy Lake, Tim (Dorothy) Maluk of Sandy Lake and their children, Stan (Marcie) of West Kelowna, BC, Tom of Winnipeg and Lou of Sandy Lake. She is also survived by Dan's family in Saskatchewan, Georgia and Winnipeg. As per Stella's wishes, no formal funeral was held, but a family service was held at the Sandy Lake Municipal Cemetery to inter Stella and Danny's ashes. If friends so desire donations may be made to the Erickson Personal Care Home. Condolences may be offered to the family at www.raesfs.ca Rae's Funeral Service of Shoal Lake and Erickson were in care of arrangements.