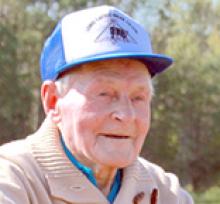 STANLEY MAYDANIUK It is with great sadness that the family announce the passing of our father Stanley Maydaniuk on June 19, 2018 at the Sandy Lake Personal Care Home. Stanley was born May 15, 1914 in the Mears District to Woytko and Alexandra Maydaniuk. He was the eighth of twelve children. Left to cherish his memory are his son Taras and friend Aline, daughters, Alice (Ray) Lussier and Janet (Barry) Finlayson, as well as seven grandchildren, fourteen great-grandchildren, two great-great-grandchildren and many nieces and nephews. He was predeceased by his wife Dora in 2005, all his siblings, one daughter-in-law, and one grandson. In 1938 Dad married Dora Kohuch and together they farmed and raised three children. In the early years life on the farm was difficult, but Dad was known for his work ethic; there wasn't much he wouldn't tackle in the way of work. Local farmers would bring all sorts of items for repair and he even was called upon for veterinarian chores. He had great carpentry skills and built his own house along with other building for farmers in the area. Later in his farming life and after he retired from farming, he took up shoe repair and leather work making gloves, mitts, and even moccasins. He was a terrific shot for hunting and loved fishing, but his greatest love was trapping, especially beaver. Funeral service will be held on Tuesday, June 26, 2018 at 11:00 a.m. in the Rossburn Town Hall with Russ Andrews officiating. Interment will follow in the Rossburn Cemetery. In lieu of flowers donations may be made in Stanley's name to the Sandy Lake Personal Care Home or the charity of your choice. The family would especially like to thank the staff at the Sandy Lake Home for the excellent care given to Dad during his seven years there. Remembrances and condolences may be shared at www.raesfs.ca Rae's Funeral Service of Shoal Lake and Erickson are in care of the arrangements. (204)759-2160