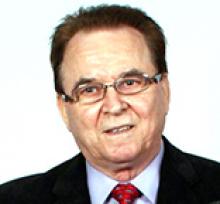 IVAN SKOK It is with great sorrow that we announce that Ivan Skok passed peacefully on Saturday, June 16, 2018 in Winnipeg at the age of 73 years after a courageous battle with leukemia. Ivan was born in Zagorje, Croatia in 1944 and grew up in the village of Gornja Voca. He started his millwright trade at the early age of 15 and this job allowed him to travel the world. He planted his seed in Ghana, West Africa where he soon fell in love with Anna and had a healthy, handsome baby boy Steven. Shortly after, he moved his new family to Surrey, British Columbia where they welcomed another son, Ivan. Life next took the family to Nanisivik, "the most northern part of Baffin Island" and many years later they welcomed the birth of Marijana, the baby girl that stole his heart. The family settled in Winnipeg where Ivan loved socializing with his Croatian friends playing cards and bocce ball or passing time with his boys at coffee shops, Kildonan Park or the Croatian picnic grounds. Ivan loved his job and worked until he was almost 70 years of age. He enjoyed his vehicles, jewellery and dancing with the ladies. Ivan was very strong-willed, resilient and overcame many challenges during his life. Ivan will be remembered by his sons Steven (Whitney) and Ivan Jr. (Jessica) and his baby girl Marijana. He will be missed by his four sweet granddaughters Kianna, Namia, Aniyah, Naliyah and grandson due on September 19, 2018; brothers Josip, Stjepan (Mirjana) and sister Durdica Prasnicki (Jurgen); aunts Amalija Jankac, Barbara Herega, Ivka Herega, Dorica Erdelja (Slavko) and uncle Janko Vrabec; cousins Slavko, Zeljko, Steve, Frank, Mladen, Mirko, Josip, Dusanka, Jadranka, Damir, Janko, Vinko, Zeljka, Malcika, Dorica, Ljiljana, Ruza, Zeljko, Marica, Bosiljka, as well as nieces Zeljka, Valentina, Renata and Danijela. He will be sadly missed by a host of close family, friends and in-laws in Croatia and Canada. Although we wish he was still here, God called him home. Ivan is a legend, father, grandfather, proud Croatian and will be loved forever. May you rest in peace with your loved ones who passed before you. Mass of Christian Burial will be celebrated on Wednesday, June 27, 2018 at 11:00 a.m. at St. Nicholas Tavelich Croatian Roman Catholic Church, 2688 Main Street with Rev. Fr. Marko Stefanec presiding. For those who wish, viewing will be held prior to Mass. The family would like to express a special thanks to CancerCare Manitoba Foundation and the staff at the Health Sciences Centre.