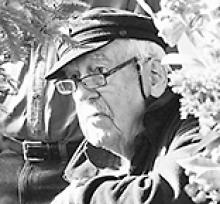 GEORGE W.P. HEFFELFINGER "Take me to the feasting hall of Valhalla." Wagner aficionado, #fanboy, and bonsai artist, George Heffelfinger died peacefully on June 13, 2018 in Victoria, BC. George was born to Ruth Jones and George Heffelfinger Sr. in Minneapolis on October 15, 1926. He was predeceased by his wife Jane in 2011. George spent formative years in Winnipeg which influenced his later decision to move to Canada. After a stint in the US Navy, he met and married Jane Sayler while attending the University of Minnesota. Together they lived in Grenfell and Thunder Bay before settling in Winnipeg to raise their five children. George and Jane were one of the city's original arts and politics 'super couples'. George was served on the board of the Manitoba Centennial Corporation and was part of a campaign that raised money to build many of Winnipeg's institutions of that era, the Concert Hall, Museum, Planetarium and Theatre Centre as well as the Centre Cultural Franco-Manitoban and the Winnipeg Art Gallery. George was a longtime liberal supporter who worked closely with Israel Asper and Lloyd Axworthy. After 25 years at National Grain, they moved to Victoria. Too young to retire, George became business manager and part owner of Monday Magazine an alternative weekly. A passion for opera led to become involved in the founding of Pacific Opera Victoria. An avid cyclist, George toured Europe extensively with family and friends. In later years, he developed a serious interest in Bonsai, serving as president of the American Bonsai Society. The best of his collection can be seen at the Horticulture Centre of the Pacific in Saanich. We will be remembering George at a Celebration of Life at the Horniculture Centre of the Pacific in Saanich, on July 4.