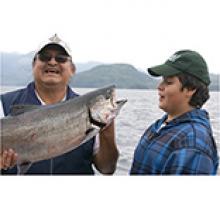 DENNIS BUBOIRE August 19, 1953 - June 23, 2018 Dennis was a true warrior battling one disease after another up to his passing on June 23, 2018 at St. Boniface Hospital, with his wife Gloria and son Levi at his side. Dennis was born and raised in Pine Falls, MB, lived and worked in Winnipeg, Thompson, Toronto and Fort Simpson, NT. In 2001 Dennis accepted a position with the Government of the Northwest Territories, Department of Municipal and Community Affairs as Capital, Infrastructure and Works Planning Manager for the Deh Cho Region. Fort Simpson, NT was our home for 17 years. With Dennis's health failing, keeping a promise to Mama Law and Papa Law that he will take care of us meant that he had to bring us home to Winnipeg. Our five day 2,800 km journey was extremely difficult for our family. We were home one week when Dennis was hospitalized with his fourth heart attack. Dennis was growing weaker with a failing heart but he got us home and that was his goal. As a diabetic for 40 years, Dennis had health issues affecting his eyes, heart, kidneys, limbs and lungs. Even though Dennis was in constant pain, he always was very social and had a great sense of humour. Our family would like to thank doctors, nurses and staff at the Fort Simpson Health Centre, Stanton Regional Hospital in Yellowknife, NT, the University of Alberta Hospital and most recently, St. Boniface Hospital. Our family would also like to thank Alison de Pelham, Dehcho First Nations staff, Val Gendron, as well as all the people who helped us pack up our house and move our belongings so we could have peace of mind moving from our beautiful house up the hill from Simpson. It was Dennis's wish to be cremated. Viewing will be held on July 3, 2018 at 1:00 p.m. at Thomson Funeral Chapel at 669 Broadway Avenue in Winnipeg with funeral service taking place at 2:00 p.m. after the viewing. Reception following services across the street at Young United Church. Dennis's funeral procession will leave from Thomson Funeral Chapel at 1:00 p.m. on July 5, 2018 with inurnment at Brookside Cemetery. There will be a Traditional Feast in celebration of Dennis's life at Thomson Funeral Home following the inurnment. Dennis is survived by wife Gloria, sons, Levi, Nicholas, Michael and Derek, daughters, Melissa and Nicole, brother Henry, sisters, Linda (Andre) and Sandra (Denis), numerous grandchildren, great-grandchildren, nieces, nephews, and Mama Law Catherine Hall. Dennis was predeceased by parents, Antoinette and Wilfred Boubard, sister Bernadette, brother Larry, and Papa Law Henry Hall. THOMSON FUNERAL HOME 204-783-7211 Condolences may be sent to www.thomsonfuneralchapel.com