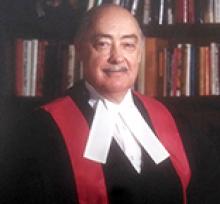 THE HONOURABLE JUDGE PHILIP LANGLOIS ASHDOWN September 2, 1926 - June 28, 2018 It is with great sadness that the family announces the passing of our father, grandfather and friend at the age of 91 at his home in Winnipeg, Manitoba. Born on September 2, 1926 to the late Harry Crowson Ashdown and Grace Langlois Ashdown. Philip was predeceased by his wife Allison Margaret Ashdown and his brother James Ashdown. He is survived by his children, Barbara (John), Joan (Mark), Lorraine (Andrew) and Philip (Andrea), his grandchildren, Norah, Madeline, Alexandra, Dylan, David, Garcia, Allison, Antonia and Zoë. Philip maintained a loving relationship with Jeff Franks and Linda Quattrin throughout his lifetime. He was a lifetime resident of Winnipeg, Manitoba. Philip received his Bachelor of Arts degree from the University of Manitoba in 1948 and an LL.B. from the Faculty of Law four years later. In addition, he obtained an MBA from the Harvard Business School in 1954, and chose to return to Winnipeg to join the J. H. Ashdown Co. Ltd. as Executive Vice President. In 1968, he left business and began his practice of law with Richardson and Co. In 1974, Philip was appointed as a Judge of the Provincial Court of Manitoba where he served until his retirement in December, 2001. Philip played the organ and the saxophone at home and his family remembers his jazz tunes on his Lowery organ in the living room. He had a sweet tenor voice and he loved to sing and especially loved to harmonize at family "jams" at the lake. Philip spent most summers of his life in Lake of the Woods, a place that he and Allison loved and the summer home of his parents, his brother Jim and wife Ruby. He loved to garden, planting bachelor buttons, marigolds, gardenias, petunias and beautiful mountain ash and other spectacular trees. During the cold winter months, Philip grew aromatic hyacinths and dazzling amaryllis that he would proudly bring up from the basement as soon as they began to flower. As the "camp" remains in the family, all of his loves and traditions will come back year after year to remind his loved ones of his gentle spirit. Philip was a member of the Manitoba Club where he gathered with lifelong friends who together appreciated their deep connection to their roots in the City of Winnipeg. He was a member of the congregation at St. Stephens Broadway United Church where he began as a Sunday School teacher in his early teens; and a member of St. Andrews River Heights United Church for many years. He was also a dedicated volunteer in Winnipeg and served on many community and professional boards including the Winnipeg Youth Orchestra and the CNIB. Philip had a generous heart and an authentic concern for the people he surrounded himself with. He loved his family dearly and they will certainly miss him for many years to come. His infectious laughter, tender heart and wisdom will always echo in his loved ones hearts and minds. The family thanks in particular Giovanni Maalihan and Alvin Alba and the many other caregivers for their extraordinary attentive and loving care of our father over the past two years. Their kindness and loving nature was the foundation of our circle of care. A service to celebrate the life of Philip and his contributions to the community will take place at St. Andrew's United Church in Winnipeg in early September. Richard Rosin Funeral Director Ltd. 204-219-1126 richardrosin.ca