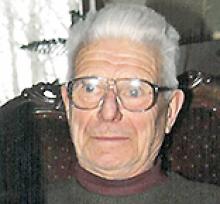 FERDINAND (FRED) REESINK It is with great sadness that we mourn the passing of Ferdinand (Fred) Reesink born March 18, 1922 in Brummen Gelderland, Netherlands. Dad was the youngest of five stepsisters and his sister Else. He grew up on a mixed farm that he greatly improved after getting his agriculture diplomas. Dad taught Sunday school and was involved in farmers youth groups. Later he became very involved in various agriculture committees - dairy, beef and especially sugar beets. Dad was married in 1954, then immigrated to France in 1959 to take over the family farm where he farmed successfully. Later in 1977, Dad decided to move to Canada with his wife and five sons. He was predeceased by his son Jean Francois. He is missed by his dear cherished wife Francoise, of 64 years, his sons, Charles, Vincent, Martin (Anyes), Carel (Jennifer) and his grandchildren. He is also remembered by Dicky, Kitty, Pim, Chris, his brothers and sisters-in-law, the friends who visited him, Gordon, Henry, Hilda, George and Ken, as well as his farm help Peter and Hank. Peter Van Ingen and Henry Schulz will be honorary pallbearers. The family would like to thank those dedicated to Dad's declining health these last few months, doctors, their staff and home care. At 96, after an interesting and well accomplished life, courageous till the end, he died peacefully on Friday, July 6, 2018, surrounded by his loved ones. Funeral Mass will be held on Tuesday, July 10, 2018 at 1:00 p.m. at St. John XXIII Roman Catholic Church, 3390 Portage Avenue with interment to follow at Sanford Cemetery. In lieu of flowers, donations can be made to a charity of one's choice. THOMSON FUNERAL HOME 204-783-7211 Condolences may be sent to www.thomsonfuneralchapel.com