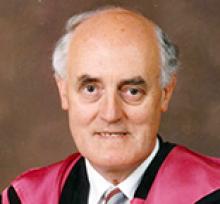 DR. JOHN WISEMAN STEELE May 27, 1934 - July 16, 2018 It is with great sadness that the family of John Wiseman Steele announces his passing, on July 16, 2018, at the Grace General Hospital in Winnipeg. He died peacefully, with his wife, Muriel, at his side. A gentleman and a scholar, he was the dearly beloved husband of Muriel; a loving father to Colin (Barb), Alison (Warren), Graham (Tilly) and Alistair (Klara); and the cherished grandfather of Keegan, Ella, Ashleigh, Evan, Deivan, Kiran, Anika and Isobel. In Scotland, he is survived by his brother Alex; and nephews, Alistair and Iain. John was predeceased by his parents, James and Janet Steele. John was born in Motherwell, Scotland, where he grew up and went to school, attending Knowetop School (Dux Medal) and Dalziel High School. Intrigued by the bottles and curious odours in the shops of local chemists, he applied to the Pharmacy Department of Glasgow University in 1951. He completed his B.Sc. in 1955 and the requirements for a Ph.D. in Pharmaceutical Chemistry in 1958. That same year he accepted a position as Lecturer at the University of Manitoba in Winnipeg, Canada. John and Muriel were married in December of 1958, in Winnipeg, at St. Stephen's Broadway United Church. At the Faculty of Pharmacy John was promoted to Assistant Professor in 1959, to Associate Professor in 1963 and to Professor in 1968. He was appointed Dean of the Faculty in 1981 and served in that position until 1992. The title of Dean Emeritus was conferred in 1995. He officially retired the following year in 1996. John undertook study leaves in London, England (1966), Bern, Switzerland (1972), Raleigh, North Carolina (1979), Montpellier, France (1986) and Auckland, New Zealand (1992), all of which proved to be not only rewarding academically, but enormously beneficial for the entire family. He was heavily involved with the Manitoba Pharmaceutical Council and served on some of its committees. He served a term on the Medical Research Council of Canada and the Manitoba Research Council. He was a member of the Board of Grace General Hospital and the President of the St. Stephen's-Broadway Foundation. His love of teaching and interacting with students was surpassed only by his devotion to his family. He opened up the world to his four children. He was proud of them all and reminded them of this fact in his last few days. They, in turn, will always think of him whenever they visit strange and wonderful places or wonder why something works the way it does. John's retirement was filled with playing tennis at the Winnipeg Lawn Tennis Club, pursuing his interest in genealogy, photography, learning Ancient Greek (and modern Greek) for fun and compiling several biographical and autobiographical works, notably: The History of the Faculty of Pharmacy - 1899-1999. He was an avid reader and world traveller. The family is especially grateful to Dr. R. Kansara and the staff at the Buhler Cancer Center. Heartfelt thanks are also extended to the nurses on "5 North" at Grace General Hospital who demonstrated so much compassion for John. Donations in the name of John W. Steele may be made to the Victoria General Hospital Foundation (Buhler Cancer Center), 2340 Pembina Highway, Winnipeg, MB R3T 2E8 (secure.thevicfoundation.ca) or to Siloam Mission, 300 Princess Street, Winnipeg, MB R3B 1M3 (siloam.ca). Cremation has taken place. A Celebration of Life will be held at Fort Garry United Church, 800 Point Road on Saturday, September 15, 2018 at 2:00 p.m. NEIL BARDAL FUNERAL CENTRE 204-949-2200 neilbardalinc.com