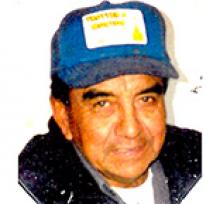 CLIFFORD JAMES OLIVER MONKMAN (a.k.a. O.C.) January 28, 1936 - July 22, 2018 Suddenly on July 22, 2018, Oliver decided that enough is enough, packed up his tools and he left. Oliver was born in Selkirk and born to build. All his life he built houses, sheds, etc., because that was his passion. Even as he was sick, he would be measuring his next project on paper to build and estimating the cost of materials. After a long hard working day he would sit back and have some refreshments. In the past, Oliver had his construction company, Monkman Builders Ltd., and employed others. A lot of houses were built. He left behind his legacy. He was a hard and busy worker. Oliver is survived by his partner of 48 years, Patricia; and their children and grandchildren; as well as his children, grandchildren and great-grandchildren from a previous marriage. Oliver is predeceased by his father Ernest Monkman; his mother Elizabeth (nee Kipling); and his son John. Families would like to thank Tudor House and all their staff for the wonderful care that they gave our loved one, Oliver. Thanks to Thomson Funeral Home for their care of Oliver, guidance and understanding through this difficult period. According to his will and wishes, cremation has taken place and no funeral will be held. We will miss Oliver dearly but he stated a few times, "When I go, I will build for God's angels, if he hires me!" THOMSON FUNERAL HOME 204-783-7211 Condolences may be sent to www.thomsonfuneralchapel.com