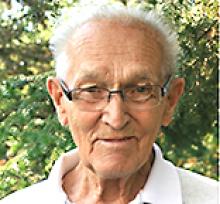 WILLIAM HOWARD (HOWIE) WHITEHEAD June 29, 1926 - July 22, 2018 Early Sunday morning on July 22, Howie died peacefully in his sleep at the age of 92. Howie was predeceased by his wife Marion and his siblings, Albert, Wesley and Maryetta (Coates). He leaves to mourn his sister Mae (Swayze) from Carnduff, SK and many nieces and nephews and their families. He will also be greatly missed by his son Bob Wilkes (Susan), granddaughters, Ketri Wilkes (Lane), Christie Wilkes (Mike), Margo Beatty (Mark) and six great-grandchildren, Mackenzie, Grace, Jesse, Dane, Rogan and Sawyer. Howie was born June 29, 1926 at Oxbow, SK. On completion of his education he spent a brief time on the farm before enlisting with the Canadian Army in the Second World War where he spent two years prior to discharge in 1945. After a brief time at home, he came to Winnipeg where he attended Success Business College and subsequently worked for three years with The Milwaukee Road, an off line railroad office in Winnipeg. Howie spent 28 years with North Star Oil/Shell Canada and retired after the closing of the refinery in 1983. The following 10 years were spent with CanadianTire Corp. at the Fort Garry store. He was a very loyal employee and a great ambassador for these companies. Howie and his wife Marion spent summer weekends and holidays at their cabin on an island in Minaki, ON with Susan and Bob, grandchildren and great-grandchildren. He loved nature especially the birds and his small but productive vegetable and flower garden. He enjoyed family time at the lake especially going for walks in the forest with "Jo", a family member's dog. Jo spent most of the summer holidays with them. Howie had an incredible work ethic and was constantly working outside to ensure that the family had a great experience at the lake. Howie and Marion were members of the Wildewood Club where they were active in the Golf and Curling sections. Howie was also a lifetime member of the Fort Whyte Centre where he participated in snowshoe programs with school children. He was a selfless, generous and courageous man. He would always think of others first, was a continuous learner, starting computer classes and piano lessons in his 80s. His courage was displayed as he maintained his humour and enthusiasm as his physical health declined. Thanks to friends and staff at Sterling House where he enjoyed their friendship over the past 10 years. Many thanks to staff and volunteers for the care he received while at the Victoria General Hospital Oncology Department, Health Sciences Centre (especially Dr. Cooke) and Tuxedo Villa. Funeral arrangements are with Thomson Funeral Home. Cremation has taken place. In lieu of flowers, donations may be made to CancerCare Manitoba or Young United Church. A Service of Remembrance will be held at Young United Church, 222 Furby St. at 1:00 p.m. on Tuesday, August 21, 2018. Limited parking is available across Broadway at Thomson Funeral Home. THOMSON FUNERAL HOME 204-783-7211 Condolences may be sent to www.thomsonfuneralchapel.com