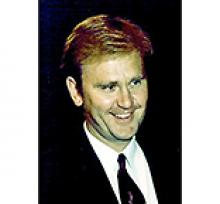 GERALD BERNARD KRAHN 1962 - 2018 Gerald Krahn, 56, of Winkler, Manitoba, formerly Calgary, Alberta, died peacefully on Sunday, August 5, 2018 in Salem Home. Gerald was born July 28, 1962 and grew up on the farm and went to school in the Miami area and attended church in Graysville. After high school, he continued his love of learning, receiving degrees in theology, phys ed, and physiotherapy. He was an avid athlete and excelled at all sports, but golf was number one. When he moved to Calgary he directed the physiotherapy department in the prestigious Glencoe Club until his MS symptoms forced him to leave his profession. In 2003, he moved in with Mom and Dad realizing that he needed them to take care of him. In May of 2009 after accepting that they could no longer meet his needs, he moved to the Red River Valley Lodge and then in December, to Salem Home. His passion for golf continued as his TV was always on the golf channel until it was switched off for the night August 4. Throughout all his difficulties, his faith never wavered. He loved watching Church of the Rock with Mom and Dad each Sunday and used his abundant time to pray. Gerald will be lovingly remembered by his parents, Bernhard and Katherine Krahn, his sister Joyce (Tony), brother Eldon (April), his nieces and nephews, Kristin (Marvin), Michael, Timothy, Evan and Jaiden and great-niece and nephew, Emma and Benjamin. He was predeceased by his brother Lyndon. Memorial service will be held at 2:00 p.m. on Sunday, August 12, 2018 at the Grace Mennonite Church, 1350 Pembina Ave. in Winkler. A special thank you to the Salem staff that took care of him these last nine years. Donations may be made in Gerald's memory to the MS Society or to the Salem Home Foundation Inc. Wiebe Funeral Home, Winkler In care of arrangements wiebefuneralhomes.com