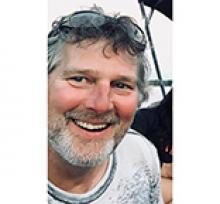 RYAN LESLIE JOHN TOEWS July 13, 1967 - August 10, 2018 On the morning of Friday, August 10, 2018, after one last morning coffee beside his wife, Rose, Ryan Toews went to be with his Lord and Saviour, passing away at home at the young age of 51. Ryan Leslie John Toews was born on July 13, 1967 to Elbert and Lorraine Toews in Steinbach, MB. He grew up in Steinbach and graduated from the SRSS in 1985. Ryan lived much of his childhood in the gymnasium, excelling at every sport. When Ryan wasn't at the school gym, he could be found boating, waterskiing and just generally living it up at the family cottage at Red Rock Lake. Ryan used his entrepreneurial skillset in various capacities throughout his career. As a General Manager, Ryan did his job like he did life - with strength, honesty and above all, integrity. Ryan was a fair leader, respected by many in the business community. Ryan married his high school sweetheart, Rose, on July 18, 1987. Ryan and Rose had four children: Randi, Dean, Samantha and Taylor. He openly shared his love for God, not just through his words, but through his generosity, love for others, and integrity. In the last five years, Ryan's favourite place to be was at his cottage on Brereton Lake with his family and especially his new grandson, Brody. In 2006, Ryan was diagnosed with a Cardiomyopathy and though he was often frustrated with his deteriorating physical state, it could be said that his enlarged physical heart only mirrored the large heart he had for others. He will be greatly missed! Ryan is survived by his loving wife, Rose, three daughters, Randi (Eric), Samantha and Taylor, one grandson, Brody, one son Dean (Shannon), his parents and parents-in-law, and many family members and friends. A celebration of Ryan's life will take place at 1:00 p.m. on Thursday, August 16, 2018 at Winkler Mennonite Church, 31 Willowdale Cr. Donations may be made to The Samaritan Foundation in memory of Ryan Toews. www.samaritanfoundationdr.com Wiebe Funeral Home, Winkler In care of arrangements wiebefuneralhomes.com