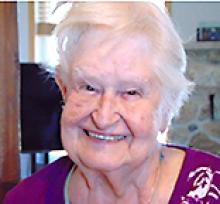 THERESA EMMA LUSTY (nee GREGOIRE) With deepest sadness, the family announces the passing on August 20, 2018 of Theresa Emma Lusty at Concordia Hospital, surrounded by the love of her family. Terry was born in St. Boniface on April 10, 1927. She is survived by her daughters, Deborah Bedford (Doug), Susan Hill (Wes) and Valerie Clark (Keven), her sons, Brent Lusty (Donna), Patrick Lusty (Marlene) and Gregory Lusty (Suzanne); as well, her grandchildren, Cameron Bedford (Rachel), Nicole Boutilier (Calvin), Graeme Hill (Kerri), Natalie Pescitelli (Matt), Jamie Clark (Kendra), Shannon Maksymowicz (Les), Megan Lusty (Jakub), Katelyn Lusty, Vincent Lusty and Jasmine Lusty. Terry was also fortunate to know the love of her great-grandchildren, Reef, Alyss, Callum and Elsie. Terry was predeceased by her parents, Joseph and Eva Gregoire, her husband Walter (1999), and sister Germaine Gregoire (2001). Mom was a devoted mother and homemaker. She was a long time member of St. Alphonsus Church, a lifetime member of the St. Al's Catholic Women's League (CWL) and also a member of the St. Jude's Circle. The Funeral Mass will be held at St. Alphonsus Church at Munroe Avenue and Brazier Street on Thursday, August 23, 2018 at 10:00 a.m. A private burial will follow. In lieu of flowers, donations to a charity of your choice may be made in her name KLASSEN FUNERAL HOME 1897 Henderson Highway, Winnipeg, MB (204) 338 0331 Condolences may be sent to www.klassenfuneralhome.com