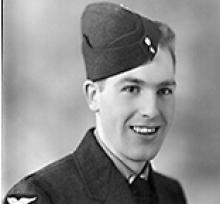 RICHARD GAMBLE JOHNSTON September 8, 1918 - August 19, 2018 Richard passed quietly on August 19, 2018 at his home of almost 60 years. Richard was born in Winnipeg but spent a part of his early life in Tipperary, Ireland before returning to Canada. He attended Kelvin High School and was a fine hockey player. As a young man, he worked for McKinney's Jewellery; at lunch, he would lace up his skates and play on the practice roster for the Detroit Red Wings when they ran their pre-season training in Winnipeg. Like his two older brothers, he answered his country's call and enlisted in the RCAF during the Second World War. He was unable to train as a navigator or pilot, but served as an aircraft mechanic preparing airplanes for anti-submarine duty at the maintenance unit in Scoudouc, New Brunswick and later on, working as a lumberjack on the west coast. He was disappointed that he was never sent overseas and frequently mused about the Battle of Scoudouc! After the war, he married Olive Pearl Costelli in 1947. With Ollie, he raised two daughters, Janine and Maureen. He spent the years after the war with Winnipeg Central Heating initially in maintenance, but later in public relations. When Central Heating closed in 1965, he began working as a sales representative at MacKay Morton Ltd. (MacMor Industries) and only retired in his late 70s. In his 80s, he still popped in from time to time to repair analog monitoring equipment. He was an avid and talented bowler and only stopped in his 90s when the league folded. He was the oldest person to join the Canadian Legion (Branch 90), also in his 90s. He is predeceased by his wife Ollie in 2009 as well as older brothers, Ed and Bert. He is survived by his daughter Janine Johnston and her children, Shanleigh P. Thomson and Ian T.D. Thomson and his other daughter Maureen Johnston. His cousin Helen Mensch lives in Russell and a large number of the Johnston and Gamble clan still reside in County Tipperary. At Richard's request, there will be no public funeral. Donations in lieu of flowers can be made to The Winnipeg Foundation, James Thomson Memorial Fund in support of the Winnipeg Symphony Orchestra. THOMSON FUNERAL HOME 204-783-7211 Condolences may be sent to www.thomsonfuneralchapel.com