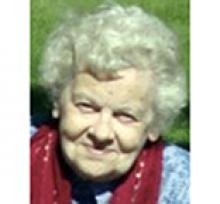 CONSTANCE (CONNIE) JEAN WORMS September 8, 1935 - August 11, 2018 Connie was born in Winkler, Manitoba, the eldest of the six children of parents, John and Anne (Anna) Worms. A few years later after Iris joined the family, they bought a farm in the Roseisle district where the two sisters attended school. After brother John arrived, the family relocated to a farm near Graysville where three other siblings were added to the family - Charles, Cathy and Terry. Since Connie was not able to complete her High School in Graysville, she took her Grade 11 in Altona together with a cousin, Opal Friesen. Her desire to teach led her to become certified to teach on permit in the one-room Hanover School near Steinbach. Then she worked on her Grade 12 and attended Normal School together with Iris. She returned to Roseisle for two years, this time as a qualified teacher, after which time she decided to establish herself in the city where she taught school in St. James for the remainder of her career. (Bannatyne School, Grade 1 from 1960 to 1970) By age 40, Connie was no longer able to attend to her beloved Grade 1 students due to the Multiple Sclerosis which had been gradually diminishing her mobility. By this time, she had moved into the Courts of St. James where she spent the next 40 years, wearing out wheelchairs and beleaguering Handi-Transit. She could be seen daily wheeling for her precious newspapers, running errands for those with less mobility than she, and joining friends for lunch or coffee, at Sals or Legends or Perkins. Connie's sisters and brothers and their children have many fond memories of visits to her delightful place on the 11th floor with its pleasant view of Portage Avenue west and the park, the swimming pool and the frequently used party room. Connie's out-of-town travels included several expos, trips with Iris and her daughters to Churchill and British Columbia, frequent summer stays with Charles and Mary in Bemidji, Minnesota, and the gatherings with family or cousins which she very much enjoyed. Connie's love of wildlife was evident from her childhood on; handling and sharing frogs and snakes on the farm; bringing a tiny pet turtle from the city for the family to enjoy; joining other birdwatchers on frequent field trips; mounting an impressive collection of birds that were brought to her by students and friends; her apartment full of pictures, replicas, and images of birds - and horses - reminders of Jess and Claire, the farm team which she had enjoyed driving and riding. Connie is also remembered for her obsession with newspapers, saving copies or clippings for family members according to their interests; saving everything recyclable fanatically to the chagrin of those around her! Volunteering for good causes was one of the hallmarks of Connie's life. From supporting and helping her favourite politician to assisting the Winnipeg African Violet Society, she found plenty to keep herself busy. Connie attended Grant Memorial Baptist Church until it became too difficult for her, so instead she attended their Bible studies in her building, and Christian Women's functions in her neighbourhood. She maintained her support for the church and its missionaries throughout her years in the city, as well as other causes that were near to her heart. Connie was predeceased by her mother Anne in 1973, her father John in 1989, brother-in-law Stan Cross in 2013, and stepmother Anne in 2014. She will be missed by her sister Iris Cross, brothers, John (Sharon) and Charles (Mary), sister Cathy Wroblewsky (Bob), and brother Terry (Sharalee), nieces, Beverly, Marion, Cheryl and Jami, and nephews, Jason, Myron and Zach. The family appreciates so much the excellent care that Connie received first in the HSC where she went in 2016, and then in The Salvation Army Golden West Centennial Lodge in St. James where she spent the last year and a half of her life. Special thanks also to the dedicated caregivers from Comforts of Home-Care, and other caregivers who spent time with Connie in recent years. We will never forget the special love and attention given to Connie by Leah Baird and Debbie Wahl. The family would also like to thank her friends and relatives who visited her, sent cards and made phone calls. Connie's joyful and uncomplaining attitude throughout her life was evident to all, and her unwavering faith in her saviour was an inspiration. A reassurance in this time of sadness is the psalmist's statement, "Precious in the sight of the Lord is the death of His saints" Psalm 116:15. Connie's ashes will be placed beside her parents in the Graysville Cemetery.