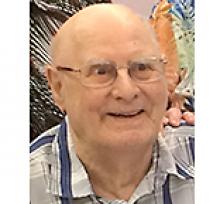 WILFRID LEON VODON July 31, 1927 - August 20, 2018 It is with sadness that we announce the passing of Wilfrid Vodon. He leaves behind his wife of 51 years, Marie-Ange; son Henri Vodon; daughter Therese (Glen) Niznowski; granddaughter Jade; a sister Lucina; brother Leopold, numerous nieces, nephews and friends. Wilfrid was born on July 31, 1927, in Findlay, Manitoba, to Denis and Rose-Anna Vodon. He grew up within a family of 11 children, in an agricultural setting during the Great Depression. In November 1966, he married Marie-Ange Vuignier. Wilfrid farmed until 1985, at which point the family moved to Virden where Wilfrid worked at Kent's Flour Mill, until he retired at the age of 64. Their house in Virden was located on a large lot on the outskirts of town. Wilfrid and Marie-Ange enjoyed gardening, visiting with family, meeting for coffee at the local restaurant and travelling to see in-laws and visit their children. Wilfrid also liked wood working and making whirly gigs for his garden and as gifts for family. In 2011, Wilfrid and Marie-Ange moved to a senior's residence in St. Boniface. Wilfrid enjoyed socializing and getting to know his new neighbours and the staff at Villa Aulneau. He and Marie-Ange played bingo, took part in exercise classes and attended musical evenings held at the senior's residence. Both Wilfrid and Marie-Ange were thrilled to become grandparents when Jade joined the family in 2013, at the age of 27 months. Wilfrid was a kind, considerate, caring man with a good sense of humour. His faith in God was a source of comfort to him during his illness, and in turn his positive attitude was a great comfort to his family. He will be deeply missed. Funeral Mass will be held at Sacred Heart Roman Catholic Church, Virden, Manitoba, on Tuesday, August 28, 2018 at 11:00 a.m. In lieu of flowers, donations may be made to the Canadian Cancer Society, Transportation Program. e-mail messages of condolence or sign the on-line Book of Condolences at www.carscaddenfuneralchapel.com G.R. Carscadden Funeral Chapel, Virden in care of arrangements.